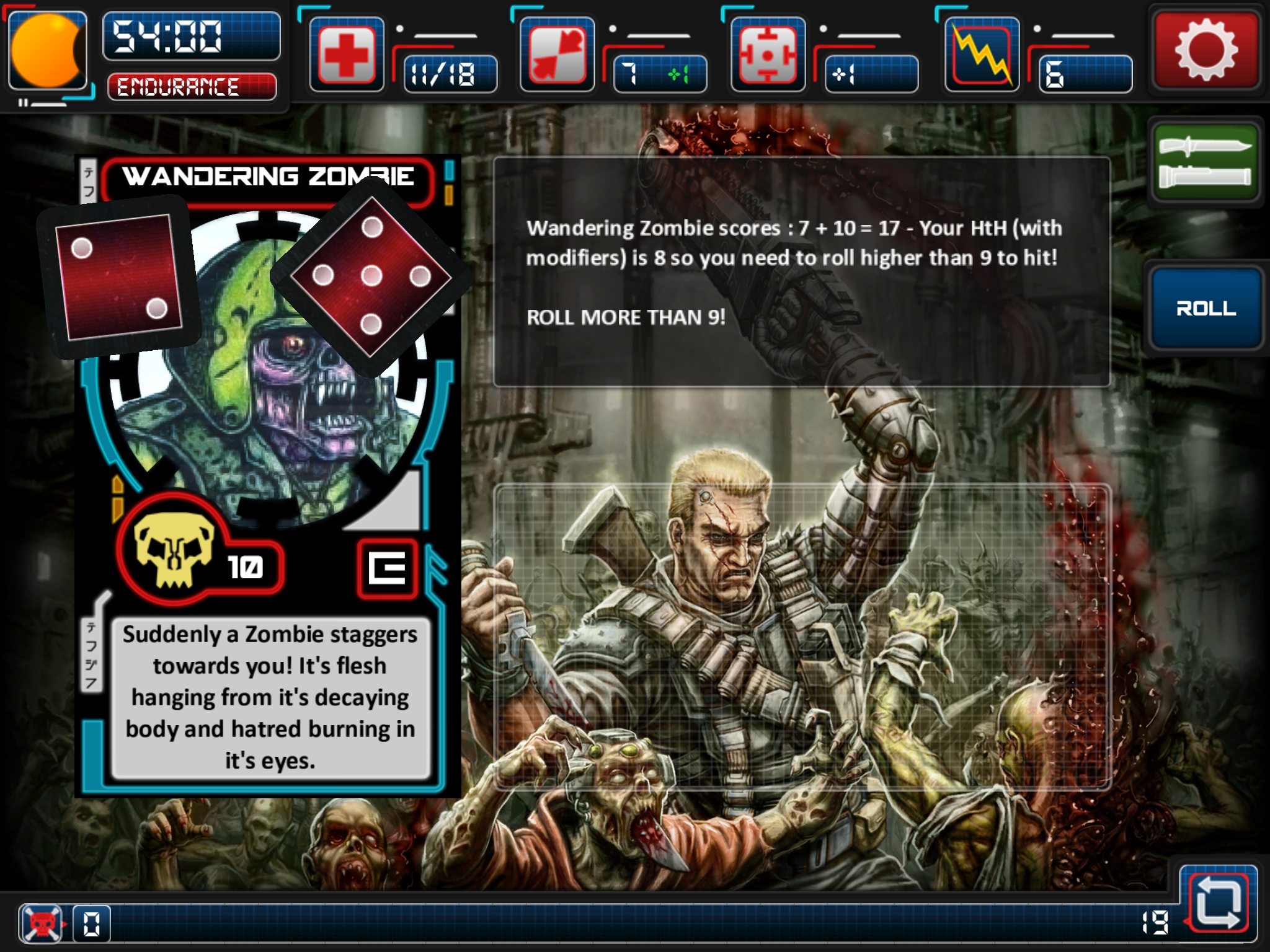 In 1987, Games Workshop launched a single-player zombie fighting board game that made it possible for lonely souls to play a full game all by themselves. I know what that is like. It’s not as sad as it sounds.

Recently, Auroch Digital re-imagined Chainsaw Warrior for iOS. Now, you don’t even have to read the complicated directions in order to kill zombies, destroy the Darkness, and save New York…

Instead of a background with a bunch of numbers on it and a spot for each pile of cards, the way the original game looks, the app features a violently graphic depiction of the Chainsaw Warrior killing the undead. If you have a sensitive nature, you won’t like this artwork. However, if you played the original game, you’ll notice that it is a recreation of the box cover, but with a little more blood and guts.

The game’s layout features the usable deck of cards on the left side of the screen. The current action that is taking place appears in the upper window next to the deck with the dice roll section in the window below.

The top of the screen shows your character’s statistics, including how much time you have left, your special ability, your endurance, strength, and so on. The buttons on the right side of the screen show your current weapons and equipment and the actions you are able to perform for the current card.

At the bottom of the screen, you will see your zombie venom and radiation bar. If you receive too much venom or radiation, you will die. 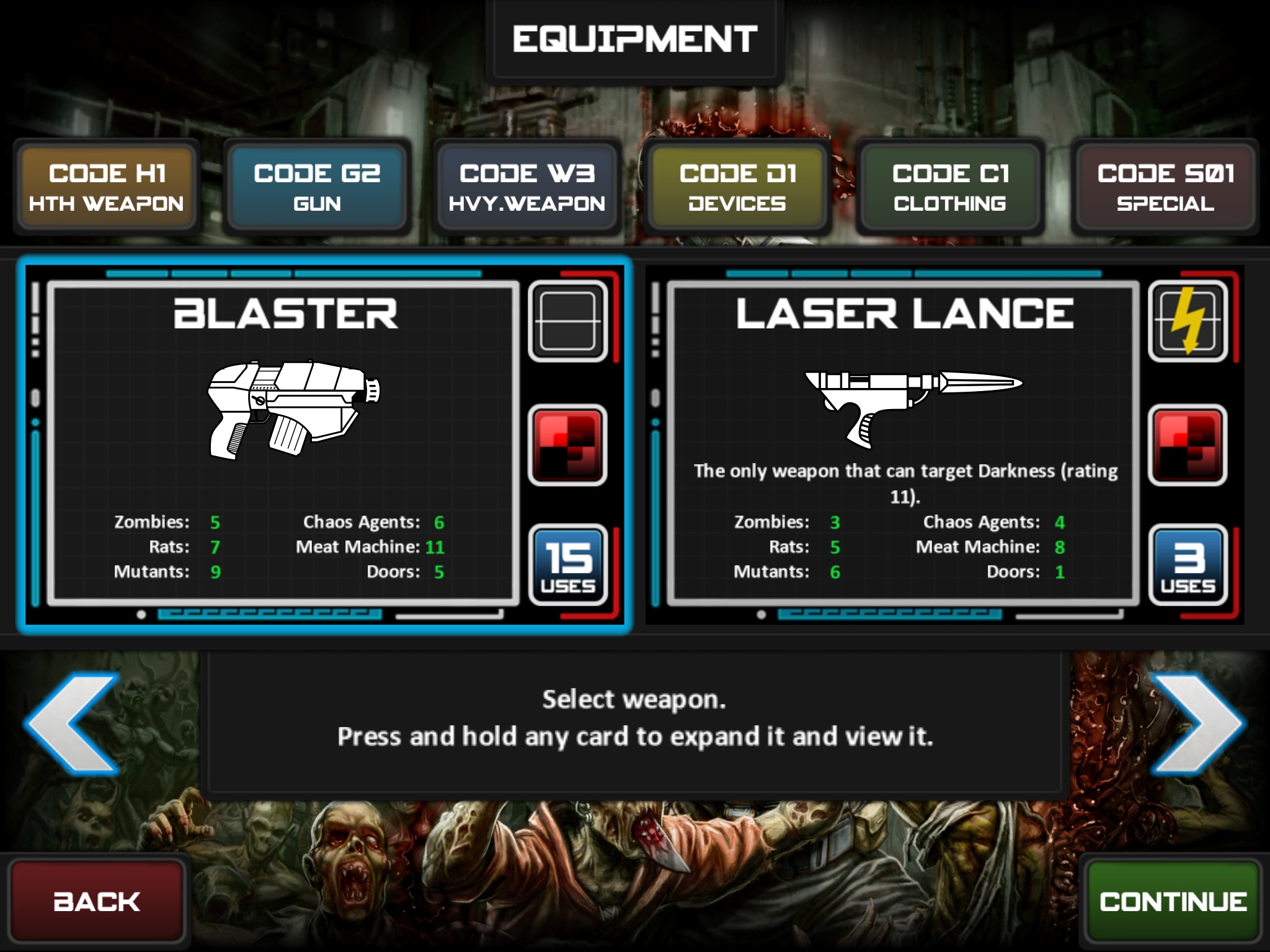 I have not played the original Chainsaw Warrior board game. However, I did watch someone play the full game on YouTube. While I cannot attest to how the physical game compares to the iOS app, I can tell you about my experience with the digital version.

The first thing you will do with a new game is to choose whether to play Easy, Medium, or Hard. I played all three versions and found that Easy was too simple and didn’t offer any kind of real challenge, while Hard mode was stupid hard. I played Hard three times and died after only a few minutes all three times. I suggest choosing Easy for your first game, just to get the hang of it, and then playing on Medium until you feel like you are an expert. You will still lose on Hard. It is that hard.

Your character has five core stats and a limited amount of weapons and equipment to carry. Depending on the mode you choose, your stats will be determined by a set number of dice rolls. One of the rolls determines how many equipment items you get to carry into battle. Weapons range from a simple knife to a rocket launcher. You may even end up just using your fists for hand-to-hand combat. Of course, the iconic chainsaw is available too.

After choosing your equipment, your game will begin. As soon as you turn over your first card, the clock starts. Oh, did I forget to mention that you only have 60 in-game minutes to save New York before the Darkness takes over?

Each round counts as 30 seconds. Basically, you have 120 turns to win, although some cards will take away a few minutes from your time. When the clock reaches zero, you’ve lost the game.

The game is broken up into two parts with two decks. The first deck includes a lot of basic zombies, a few mutants and Chaos Agents, and a lot of traps. The second deck has more difficult enemies to kill and includes the main boss, the Darkness. You must play through the first deck of 54 cards before there is even a chance to meet the Darkness. However, he might be the first card in the second deck.

When you turn over your first card, you’ll read what the card says. For example, a card may have a description of a trap you have just encountered. The action window will read, “You encountered a trap.” Your available actions will appear as buttons on the far right side of the screen. For example, if you encounter a zombie, you can shoot it, attack it with hand-to-hand combat (HTH), or use an item.

If you choose an action that requires a roll, the enemy’s dice will roll automatically and you will see the results. Then, tap the “Roll” button to see if you have succeeded. Your success depends on a number of your stats and dice rolls against the enemy’s.

If you manage to make it to the Darkness, be sure to have a few rounds left in your Laser Lance. That is the only way to kill him. In Easy mode, he isn’t so tough. I never made it to the Darkness in Medium or Hard mode, so I don’t know if he is super bad or not. 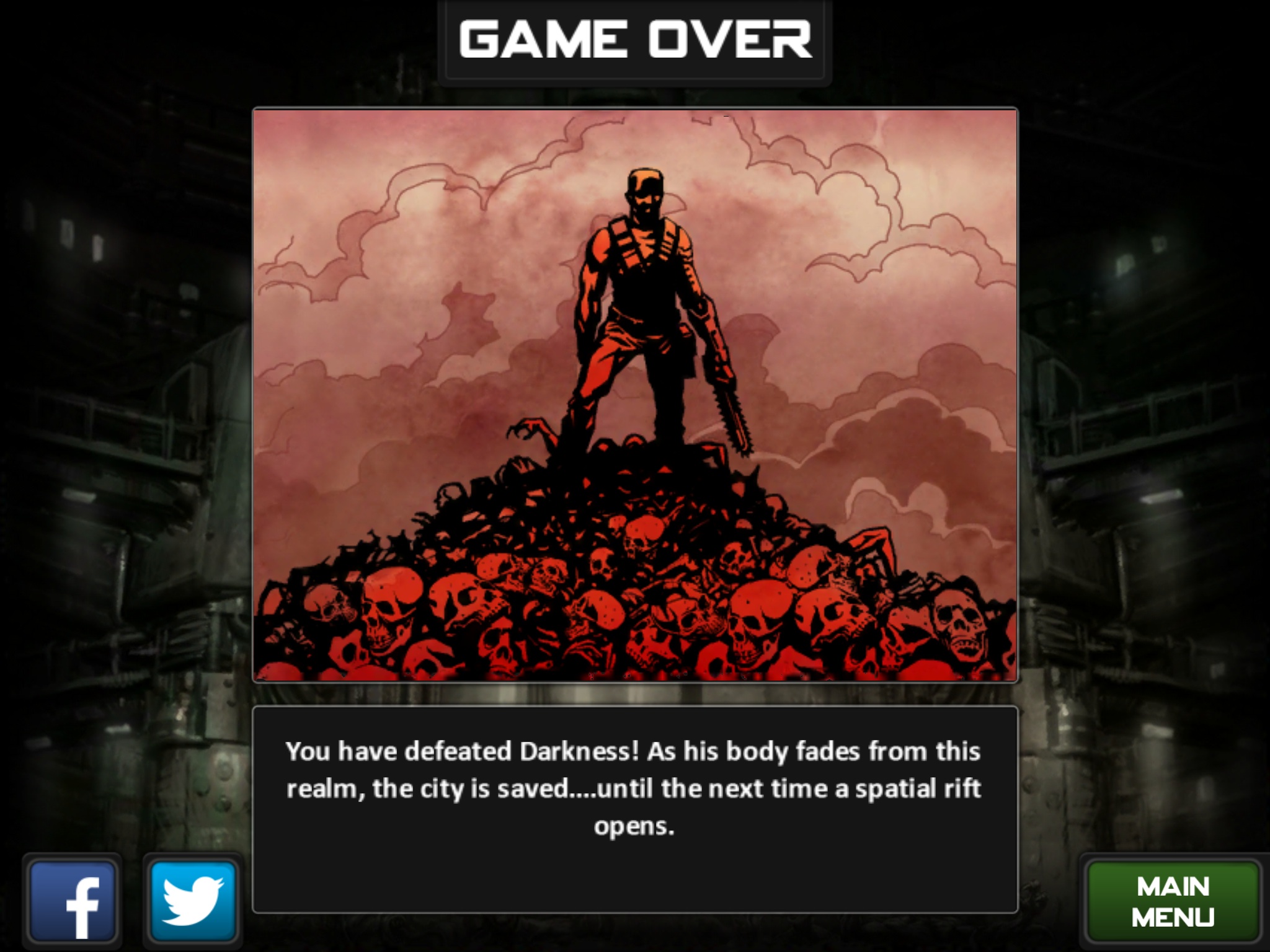 Based on the gameplay that I watched on YouTube, this iOS version makes it way easier to keep track of rolls, stats, and time. The game is based heavily on player stats and dice rolls versus the enemy. The app does all of the calculating for you, making it easy to move quickly through the game.

You can record your entire gameplay and share it with other Chainsaw Warrior players through a community based website called Everplay, by tapping the Settings icon and then tapping the Record button.

There is not enough information about the game. I felt like I was always out of control. Even though the app does all of the calculating for you, I would like to know more about what each card does.

I’d love it if the developers would add a section that included the original rulebook. I’d also like to be able to see every card from the game in a special section. That way, I could do some research on what each bad guy can do and plan my attack with that in mind.

Chainsaw Warrior costs $4.99, which is less expensive than the average board game app. I’m glad they chose to keep the price low because the game does not come with a lot of special features. Five dollars is about right for the price of a game like this.

If you have played the original Chainsaw Warrior, I have a feeling you may not like the fact that all of the stats and dice rolls are calculated for you. It seems like that is what made the game special. At the same time, you might appreciate not having to deal with bucket loads of dice. As a new player, I thoroughly enjoyed playing it on Easy and Medium, but I’m very glad the developers didn’t decide to only offer the original Hard mode because it is just too hard. This game is available for the iPhone, iPad, and iPod touch. Download it in the App Store today.

If you want to play a game with a lot of dice in it, Revensburger’s Las Vegas! will scratch that itch. For a stats-based game, Endgame: Eurasia, which is also by the same developer as Chainsaw Warrior, is a stats heavy war game.

Have you played the Chainsaw Warrior board game? What was your favorite aspect of it?