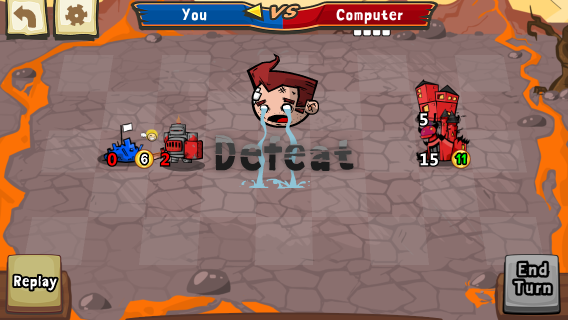 Cards and Castles mixes two of my favorite things together: turn-based strategy and card battles. It also throws in one of my least favorite terms: free-to-play. Has Bit Mass created a game that perfectly blends these characteristics? Read on, dear adventurer, and let’s find out together.

Cards and Castles takes place in a fantasy world with five factions that seem to constantly be at odds. There isn’t much story in Cards and Castles, but the world definitely has a feeling to it, and the flavor text on the cards helps to give the game a bit more personality.

The game itself is essentially composed of two phases: deck building and battling. The battles take place on a variety of fields, but the main characteristics remain the same. Each side has a base with 30 points of health, and the goal is to lower your opponent’s base to zero before they can do the same to you. 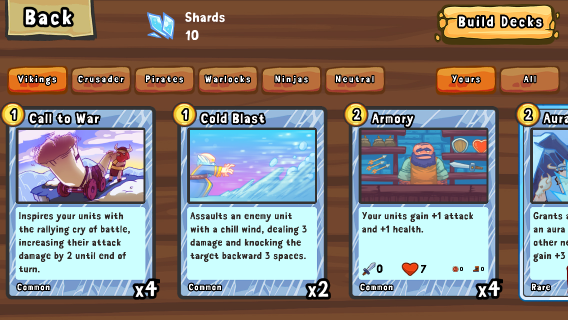 This game has tons of personality thanks to its cartoony art style, but Cards and Castles goes beyond that by paying a stunning amount of attention to even its smallest aspect. Each card has distinct art and creates a unique looking character or effect when played. The music and sound effects are also highly detailed. The game plays special tones during events and even when you open rare cards, which helps add to the excitement.

While the game gives you a starter deck during its succinct tutorial, the first thing you should do in Cards and Castles is build a deck of your own. The game handles deck building well. Viewing and selecting cards is easy no matter what your screen size, and the game has some helpful metrics to keep your decks balanced. Each of the five factions in Cards and Castles has a distinct feel. Some excel at direct damage, while others can increase the power of troops you’ve already deployed. This is a huge aspect of any card game. If the cards all felt the same there would be very little reason to edit your deck. Furthermore, you wouldn’t have to sacrifice some abilities for others when deciding which two factions to include in your construction.

The battles boil down to pretty simple, grid-based strategy affairs. The cards in your hand all have a specific gold cost attributed to them. Each turn you will receive one gold more than you did the previous turn until you reach the cap of ten. Your gold resets after every turn, meaning you are unable to save up gold for your big cards. This is actually a nice touch, as it keeps the early game balanced. 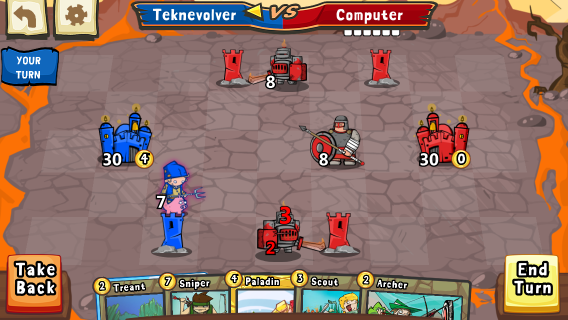 This game is just plain fun to play. It’s great in short burst, and the asynchronous multiplayer makes that aspect even better. The only problem I thought I was going to have with it was the inability to transfer my cards and matches between devices, but the game implements an account system immediately after you complete the tutorial. This allows for seamless data transfer between iPhones and iPads.

Unfortunately, Cards and Castle lacks a few touches that would make it a serious card or strategy game. My biggest problem with the game, is the inability to see how many cards are left in your deck. Cards and Castle penalizes you for running out, but the information is not readily available anywhere. This is a pretty large oversight, as most card games push this information to the forefront. To a lesser extent Cards and Castles shies away from aspects that would make it a true strategy game, such as terrain conditions or directional attack advantage. I believe this was a design decision, however, and I can’t really fault them for wanting to make a more lighthearted experience.

Bit Mass has created a truly free-to-play experience with Cards and Castles. The initial download costs you nothing, and all the additional purchase will only serve to accelerate your progression. This game has a ton of single player content that is all easily unlockable without making any purchases. The online component is more competitive, of course, but even there, it’s not too hard to hold your own. Cards and Castles does have ads, but these can be removed by making any in-app purchase. I found the ads to be rather unobtrusive, though, so I didn’t feel the need to spend any money on this app.

Cards and Castles isn’t truly a strategy or cards battling game. It lacks just a few of the features that would make it fit into either of those categories. This game is a ton of fun, however, and borrows just enough from those genres to make the gameplay deep and engrossing. I highly recommend at least checking this app out.

This game reminds me heavily of the iPhone classic Hero Academy. Its card mechanics also remind me a bit of Hearthstone.