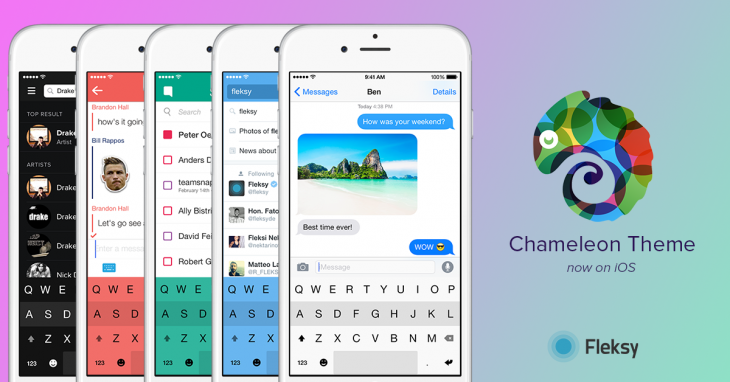 A dedicated Tips Extension shows you helpful tips throughout the app while a new Color Pops Extension lets you customize the colors of your key pops (disable them completely via a transparancy slider).

Next up, the new themes.

Chameleon, the most popular Fleksy keyboard theme on Android, is now available to iPhone and iPad users. Chameleon changes color based on the app you’re using, and is “the first theme of its kind on iOS.”

And with St. Patrick’s Day looming, there are new Shamrock and Rainbow Mist themes available, too. Other improvements include a new Show Suggestions toggle, a reworked emoji keyboard and a tweaked Twitter keyboard.

In other Fleksy news, they partnered with Chinese handset maker Meizu which will pre-install Fleksy on all its phones worldwide. And earlier this month, Fleksy Keyboard was released for the Samsung Gear S smartwatch (also on the Galaxy S6 via Samsung Galaxy Gifts) though the benefit of wrist typing wasn’t immediately obvious.

The iOS edition of Fleksy Keyboard was recently awarded the title of the world’s fastest keyboard. This Fleksy update is provided at no cost to existing users.