Apple has released iOS 8.1.2 this afternoon with a handful of bug fixes and other improvements. Specifically, the release notes say the update addresses an issue where ringtones purchased through the iTunes Store may have disappeared from users’ devices.

You can access the new firmware over the air via Settings > General > Software Update, or via iTunes by connecting your iPhone, iPad or iPod touch to a computer. But as usual, we recommend that users who are jailbroken, or plan to jailbreak, avoid the update for now.

Today’s release comes three weeks after Apple pushed out iOS 8.1.1 to the public, which also brought about various bug fixes and a patch for the Pangu jailbreak. The software has since been exploited by the TaiG jailbreak, but it’s possible that today’s release kills it as well. 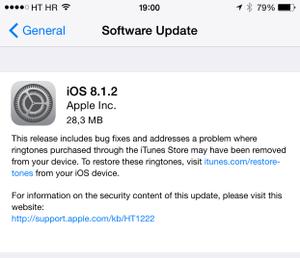 Again, unless you’re experiencing the aforementioned ringtone problem, there’s no need to rush to update here—it’s a minor release. Apple has seeded a beta version of iOS 8.2 to developers, and we expect that to be far more significant in terms of new features and changes.

For those looking to update, 8.1.2 is compatible with the iPhone 4s and newer, the iPad 2 and newer, and the fifth generation iPod touch. You can use one of the methods mentioned above, or grab the firmware from our Downloads page and reference step 4 of this tutorial for help.