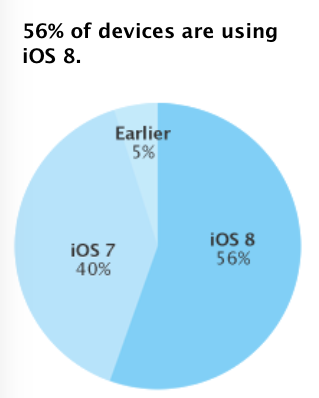 The adoption rate for iOS 8 is slowly starting to pick up, according to Apple. As noted by MacRumors, the company tonight updated its developer portal with a new graph showing that the latest major revision of its mobile software is now on 56% of compatible devices.

This is good news for Apple, as the initial adoption rate for iOS 8 was embarrassingly low for a company that likes to tout the figure. In October, iOS 8 was believed to be installed on just 47% of compatible devices, compared to 70% for iOS 7 in the same time a year ago.

It’s not hard to guess what caused the mini spike in iOS 8+ adoption. Apple released iOS 8.1 last month with a number of bug fixes, resolving a lot of the concerns from 8.0.x. It’s also likely that the iOS 8 jailbreak encouraged a number of previous holdouts to update.