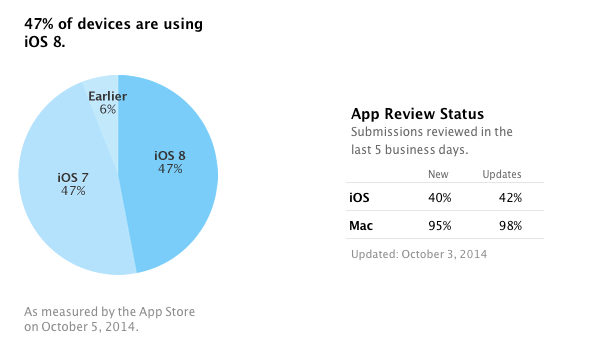 iOS 8 is now installed on 47% of all compatible devices, according to Apple. The company updated its App Store support page for developers tonight, showing that adoption for the latest major version of iOS is now tied with iOS 7, leaving just 6% of devices on older firmware.

This means that iOS 8 adoption has gone up just a single percentage point in the past two weeks, as Apple reported it installed on 46% of devices on September 21. It’s believed that the still-sluggish iOS 8 adoption rate may be due to the number of bugs that have plagued the software.

Users who have either updated to iOS 8 or purchased new iPhones with it preinstalled have complained about various issues, including Wi-Fi and Bluetooth bugs, and trouble with iCloud Drive. Apple tried to reconcile with iOS 8.0.1, but that ended up making things even worse.

Still, every major iOS update has had their fair share of teething issues, and that has never halted the adoption rate like we’re seeing with iOS 8. Last year, for example, iOS 7 featured a highly controversial redesign, and adoption rate was at nearly 70 percent at the 20-day mark.

This being said, we should see iOS 8 adoption pick back up in the coming weeks. On September 26, Apple stopped signing iOS 7.1.2, making it impossible for users on iOS 8 to downgrade, and last week it issued the first beta of iOS 8.1 to developers, signaling its impending release.