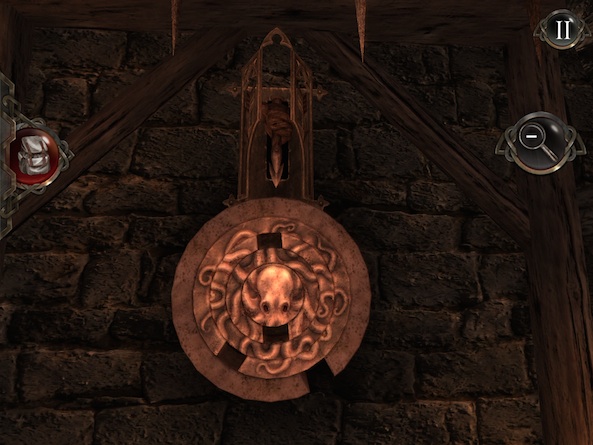 Hellraid is actually an upcoming first-person combat adventure game where players fight hordes of demonic enemies. So, imagine my surprise when I discovered that this is completely different than the as-yet-unreleased game that shares the same name.

It features the same dark, demonic theme with similar graphics and a first-person point-of-view. It is set in the torture dungeon of Crell and even features some of the same rooms, which can be seen in screenshots of the upcoming release.

It is not, however, a combat adventure game. In fact, it is quite the opposite. Instead of charging blindly into battle, players must use their wits to avoid attack at all costs. If the enemy sees you, you will die, no bones about it (except the ones in the cages).

Players move around different rooms using a virtual joystick that appears on screen wherever you touch the left side. This is a very useful feature since we don’t all hold our devices the same way.

You can look around by dragging your finger on the right side of the screen. You will definitely want to take advantage of the look controls because there are hidden crystals that are hard to see from most angles.

The game is a mix of fantasy fiction and horror. It is filled with wizards, warlocks, and demons, and also has an eerie soundtrack of moans and tortured screams. Players are trapped in the dungeon of an evil spell caster who is trying to unleash the powers of hell. It gets pretty dark. If you are squeamish about demons and burnt up skeletons, you may not like this too much. 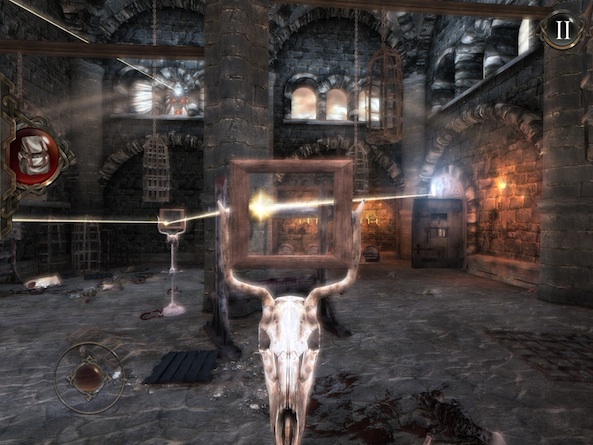 Even though the game looks, for all intents and purposes, like a dungeon crawl or point-and-click adventure game, it is anything but. The goal is to get out of the chamber alive. There are seven chambers before you reach “The Blinded,” where you must defeat the end boss using your wits. Don’t expect to load up on weapons and potions in this game. Your intelligence is your strongest ally.

When the game begins, you get killed right away. Interesting start to an adventure, I’d say. When you respawn from your recently-deceased state, you’ll be inside a stone coffin. Swipe the screen to move the lid from your resting place and begin walking.

It is important to look around the room for clues, diary pages, items, and anything that may help you later on. If there is a strange looking wood spike on the ground, pick it up. You will need it later.

Players are also tasked with collecting blue crystals along the way, so be sure to peek into dark corners in search of subtle glowing light.

In addition to the virtual joystick, players must sometimes (although not very often) use tilt controls. For example, early on in the game, players must cross a beam by tilting their device one direction or another in order to “balance” on the beam. From what I can tell, the game recalibrates every time you have to restart the tilt action. So, if it seems like the tilt controls aren’t working very well and you die, place your iPhone or iPad on the table before walking across the beam again and see if the gyroscope recalibrates and makes it easier for you to control your device. Again, you only have to use tilt controls a couple of times, so it isn’t going to affect the entire game.

Just like in traditional room escape games, players look for objects to help them get from one place to another, and then solve puzzles to unlock chests, open doors, or reveal clues.

Unlike traditional room escape games, players also have to contend with a demon or two. In each circumstance, there will be a way to avoid or kill a demon by solving a puzzle or pulling a lever, but don’t get too close to these bad guys. Once they spot you, you won’t be able to run away. The game reverts to a cinematic clip, showing you get face-melted by the demon. Luckily, you will respawn in the closest crypt. You’ve got unlimited lives, so try again until you get it right. 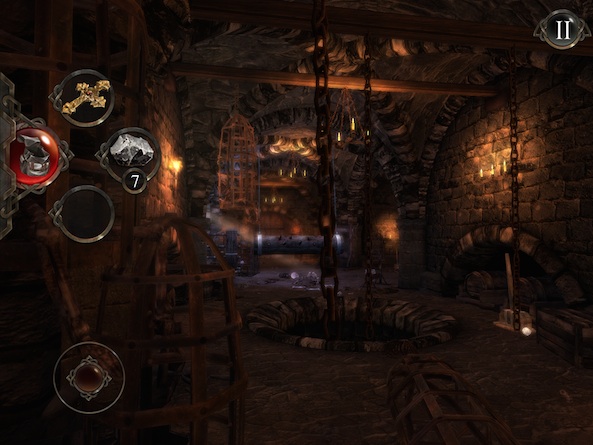 I love The Room, and this game reminds me of it on a smaller scale. The puzzles aren’t nearly as complex, but they certainly keep you guessing. I also love combining the puzzle genre with fantasy horror.

I didn’t find anything wrong with this game, other than I wish that it were longer. It has seven chambers and I managed to make it through four of them in one sitting. Hopefully, the team is working on a second release.

Hellraid: The Escape costs $2.99. Frankly, I expected it to be about twice that much. It is a tremendously good price for the quality and performance you get. The replay value is somewhat low because, once you solve a puzzle and escape a room, there is no reason to go back. However, the game is full of Game Center achievements, which makes it worth replaying after you’ve completed it the first time.

I love this game. I was expecting something more in the vein of a dungeon crawl, but was pleasantly surprised to discover a room escape instead. It is not the most complex game you will ever play, but it features great graphics, a creepy story, gruesome imagery, and plenty of cause-and-effect puzzles to keep you interested. Download it in the App Store today.

Year Walk is an atmospheric puzzle adventure game that gives you the creeps. In Fear I Trust is another very dark and scary room escape game.

What do you think of Hellraid: The Escape? Let us know in the comments below.