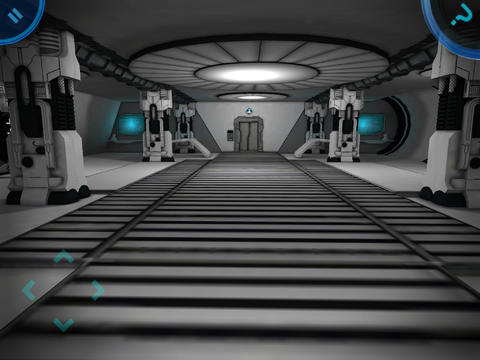 If you are getting tired of all of the flat, colorful, iOS 7 looking casual puzzle games, you might need a break with something that looks like it came out of the future.

The Stormglass Protocol: Room Escape! is a room escape game (obviously) that features rich graphics, an immersive storyline, and puzzles that will have you turned upside down before you make it out of the first room…

Players wake up in a room to the sound of someone welcoming them to the facilities over a loudspeaker. You don’t know where you are, how you got there, or why you are there, but you know you need to escape. Unfortunately, there are 16 locked doors blocking your escape. Good luck finding a way out.

Players are pulled into the game adventure through a first-person point of view. So it feels like you are inside the secret lab. Using a virtual D-pad, move around the room, trying to find clues. Drag your finger on the screen to look around. Tap an object to interact with it or pick it up, if you can.

The story is set in a science fiction reality where nothing is what it seems to be. The game is actually based on a book. “The Stormglass Protocol” is the first in a young adult series by Tim Pratt and Andy Deemer about a boy who plays at spy games until the exploit stops being a game. It is full of futuristic gadgets and action-packed espionage.

The game is full of the same type of space-age fun and adventure and incorporates plenty of light-hearted humor. Each of the 16 locations is filled with complex and challenging puzzles that push your brainpower to its limits. The game’s mechanics work with you by offering hints if you have tried and failed one too many times.

Each area requires a key that can only be found by completing confusing mazes, triggering lasers, reconnecting broken circuits, and more.

You can try out the first three levels in the free lite version and unlock the additional 13 levels for only $0.99. Or, if the game seems up your alley, download the full version right now. The price tag is very low for a game of this caliber. You may as well jump in with both feet.

Do you like room escape games? Do you have a favorite on iOS?