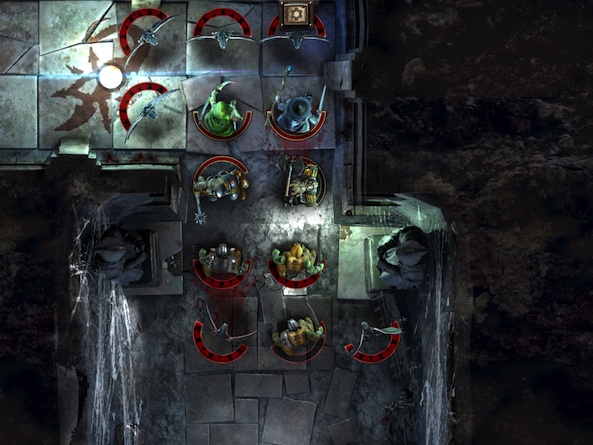 The Warhammer world is intimidating, even for people like me who have been regularly engaged in role-playing games for more than a decade. The game and its many, many pieces is expensive, it takes up a lot of space, and players are stereotypically known for being merciless in their gaming tactics.

In 1995, Games Workshop released the Warhammer Quest board game as a simple dungeon crawl set in the epic Warhammer world. Its popularity was so massive that the game is still considered one of the best ever to be released by Games Workshop.

Only a few weeks ago, Rodeo Games launched an iOS version of Warhammer Quest that is similar to the board game in look and feel, but makes it much easier for you to crawl through dungeon after dungeon for hours on end without having to wait for your friends to show up with the red vines and Mountain Dew…

The game is designed flawlessly. Every crack in the tile, shine on the armor, and blood splatter on the floor is detailed with unbelievable precision. The characters’ animations add to the fantasy. When the Marauder goes berserk, he beats his chest. When the Dwarf trips due to an unbalanced stance while using his Great Axe, you see him fall to one knee.

The dungeons look like a digital representation of what your tabletop would look like if you were playing the board game. Rooms are connected with hallways that fill the screen as you venture deeper inside.

The world map stays dark until you’ve discovered a new location. Players select new dungeons to enter or quest to follow by selecting new areas that appear on the map every time they are ready to go adventuring.

The towns unfold like a pop-up book so you can see the village inside. Characters don’t actually physically walk around in the towns, but they are able to visit the market, train, pray at the temple, and change warriors in the Adventurer’s Guild.

I almost don’t know where to start. The game offers so much for fans of dungeon crawls. To begin with, you have a base of four adventurers: a Marauder, a Grey Wizard, a Dwarf Ironbreaker, and a Wood Elf Waywatcher. For three dollars each, you can add a Dwarf Trollslayer, Warrior Priest, and Archmage. At the start of each dungeon crawl, players pick the adventurers that they will be taking into battle.

When you start your first adventure, you will be taught how to move, fight, and heal your characters. Then, you will begin the hunt. Each room offers a random event that may include battles with Snotlings, Goblins, Orcs, and more. The higher level your characters gain, the more difficult the dungeons become and enemies get bigger, smarter, and more powerful.

When you visit a town, you will be able to buy and sell goods in the market. Each town includes three categories, the Bazaar, which offers consumables that will heal characters when not actively in battle, a Blacksmith, who offers a variety of armor, shields, and weapons at a premium price, and a third category that is specific to the town you visit. In one town you may be able to buy elixirs for strength and power, while in another town you can purchase special weapons.

You will also be able to train your characters in towns. If they have reached a certain number of experience points, you can pay gold to train them. Each level costs more to train, but offers greater enhancements to the characters’ abilities.

If you want to try to add a special bonus to your adventurers, send them to the temple to pray. If the gods are listening, they will be granted a special ability or power that will last through one dungeon. Results of prayer are based on a dice roll, so you may end up with nothing.

The game’s mechanics, like the board game, are based on dice rolls and stats. So, one giant spider may go down with one attack, while another will take multiple hits to be killed. You don’t see the results of the roll or the attack-versus information. This part of the game is done behind the wall of the dungeon master (or, to sound less nerdy, inside the game’s mechanics).

Sometimes, during a dungeon crawl a player will come across encounters. These are not battles, but scenarios in which one or more players may be adversely affected. For example, in one room, a foul stench fills the air, causing characters that don’t roll a successful “will save” to have a temporary reduction to one or more skills.

Encounters also happen in towns and while traveling from one place to another. In one encounter, one of my adventurers was knocked over by a raving lunatic in town and had a cracked rib that affected his stats through an entire dungeon.

While the dungeon crawls are fun, what makes this game stand out above other games in the genre is its deep, engaging storyline. I rarely play an iOS game that is so similar to real-life role-play games that I participate in. I can almost hear one of my friends reading the text of the next quest while the rest of us munch on Doritos and drink iced coffee to stay awake.

In addition to buying more adventurers to add to your team, you can also purchase in-game coins that can be used to buy items in the market. However, the game offers plenty of ways for you to earn gold by playing, so the only reason you would pay for more is if you are too lazy.

Once you’ve completed all of the quests and dungeons in Stirland, you can continue the adventure by unlocking the Hidden Threat – Skaven expansion pack. This package includes the discovery of six new settlements in the Reikland region, plus new quests, new enemies, and new dungeon tile sets. The dungeon crawling just goes on and on. 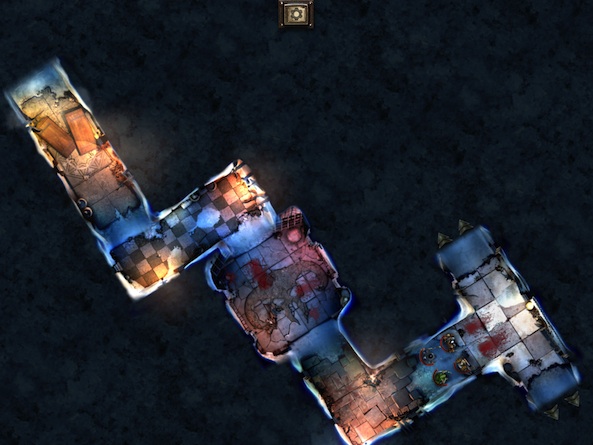 The iOS adaptation stays true to the original in looks and design. However, you won’t have to do any of the work of rolling for skills and saves. All of the mechanics are done behind virtual closed doors so you can focus all of your attention on staying alive, killing stuff, and looting bodies.

The animation and graphics are fantastic. I love how much attention was paid to the little details, like the open book towns and howling orcs.

My favorite part of this game is the role-playing storyline. It feels more natural than any other text-related adventure that I’ve played in an iOS game.

I wish there was more. Even though the game offers more than 25 hours of gameplay, which I haven’t even come close to reaching, all I can think of is what will happen when I get through the entire adventure. My hope is that, by that time, Rodeo Games will have come up with a third expansion that will let me explore the Lair of the Orc Lord or the Catacombs of Terror.

Considering the fact that you can’t buy the board game new anymore, and used versions are selling on eBay for between $150 and $500, I’d say the download price of $4.99 is a bargain. As a dungeon crawl, the cost is comparable with others in the genre. While you could spend up to $14 more on additional adventurers and the expansion pack, it is still a great price for a great game. Your progress is saved in iCloud, making it possible for you to pick up the game on different devices so you can seamlessly continue on the iPhone and iPad.