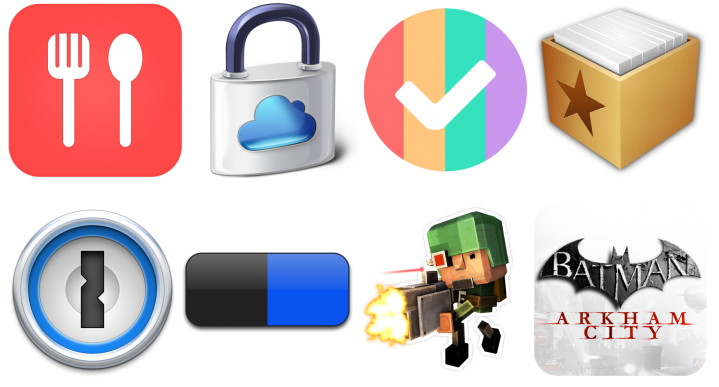 We’ve already hit the one month mark since we introduced Mac App Recap, a weekly column that covers a handful of the best new, updated and discounted apps for OS X. The idea stemmed from our daily App Recap roundup for iPhone and iPad apps, but this one is posted on a weekly basis because of less activity on the Mac App Store. This week, we’ve got 10 apps to show you for to-do lists, RSS feeds, password management and more. Check it out…

Block Fortress: War is a new real-time strategy game set in an alternate and blocky dimension, home to a diverse collection of alien civilizations. Take control of an army and fight epic battles across a huge campaign, with several heroes and five unique races to master. Block Fortress: War is $9.99 on the Mac App Store and requires OS X 10.9 or later and a 64-bit processor.

Taasky is a beautiful task manager for Mac with several innovative features: editable colored lists, priority tasks, intelligent reminders, iCloud synchronization and more. The app has an award-winning design that looks best suited for the all-new OS X Yosemite, with simple and intuitive controls. Taasky is $3.99 on the Mac App Store and requires OS X 10.8 or later and 64-bit.

Recipes is a recipe manager for building a visual library of all of your favorite food dishes, while making the documentation of your cooking process a delight. You can categorize recipes from around the world, search for recipes in the in-app web browser, create grocery lists, share recipes and more. Recipes is $9.99 on the Mac App Store for OS X 10.9 or later and 64-bit.

Earlier this week, our own Christian Zibreg covered a recent update to the password manager app 1Password. The update adds support for the WhiteHat Aviator web browser, adds a Watchtower vulnerability status column in the Top View, improves the performance of code signature verification and more. 1Password is $49.99 for OS X 10.8.4 or later and 64-bit.

Following its reintroduction on the Mac App Store last week, the popular RSS reading platform Reeder 2 has been updated to version 2.0.1. The app now lets you set various syncing options as gesture actions, alongside bug fixes for Pinboard login issues, adding subscriptions and more. Reeder 2 is $9.99 on the Mac App Store, and requires OS X 10.9 or later and a 64-bit processor.

Uncertain of his sister’s fate, a boy enters LIMBO. If you have a moment to try out this dark and mysterious game, it has been discounted from $9.99 to $4.99 on the Mac App Store for a limited time. In LIMBO, you wake up as a boy lost in a strange forest, with no indication of where he is headed. The touch-based platformer game requires OS X 10.6 or later.

Batman Arkham City GOTY has been on sale all week for $9.99, down from its regular $29.99 price tag. In the game, Batman is imprisoned alongside Gotham’s most notorious criminals, and he must use all of his wits, gadgetry and skill to escape before it’s too late. Batman Arkham City GOTY is $9.99 on the Mac App Store for OS X 10.7.5 or later.

PopClip has become of the top paid apps, thanks to a sale that drops the regular $4.99 app to 99 cents for a limited time. PopClip is a simple extension that appears when you select text with a mouse on Mac, providing instant access to actions like copy and paste, spelling corrections and more. PopClip requires OS X 10.6.8 or later and a 64-bit processor.

Locko is a password manager and file vault app that draws some comparisons with 1Password. It is substantially cheaper, however, discounted from $19.99 to just 99 cents on the Mac App Store. The app stores confidential information such as web logins, credit card data, computer accounts and more. Locko requires OS X 10.8 or later and a 64-bit processor.

As always, we appreciate any feedback about this column in the comment section down below. If there are any new, updated or discounted Mac apps that we overlooked, feel free to share an App Store link with us. If you’re an app developer yourself, connect with us through email or on our social platforms if you would like to share your app for coverage consideration.