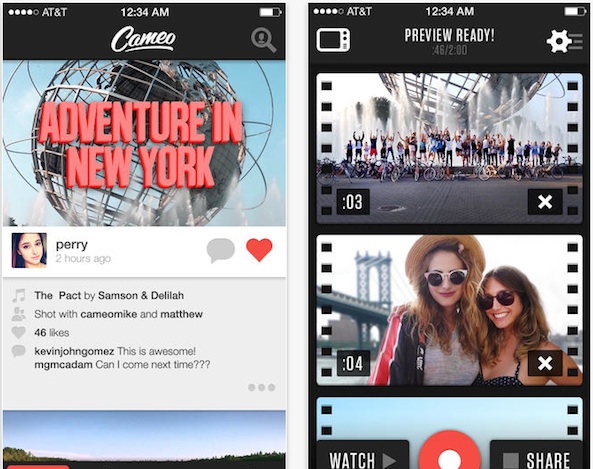 For the second time in the past year, Vimeo has acquired an iOS app-maker. Following its purchase of Echograph, an app for creating GIFs, in early 2013, the video site has bought Cameo, an iPhone application for making short, high quality movies.

If you’ve never heard of Cameo before, that’s probably because it just launched in October of last year. But it’s been turning heads during its 6 months in the App Store—we named it one of our apps of the week, and Apple gave it a ‘Best of 2013‘ award…

Here’s Recode with the scoop:

Vimeo CEO Kerry Trainor isn’t releasing financial details, so it’s easy to assume this is a relatively standard “acqhire” deal, though Trainor says that’s not the case. All 14 of the company’s employees are supposed to go to work at Vimeo, and Trainor says Vimeo will keep running Cameo as a standalone app — just like it did a year ago when it bought Echograph,  a GIF-making app.

“This is a case where the product itself is really great, and we’re really excited about it,” he said. “We are absolutely going to be building on it.”

The site points out that with this purchase, Vimeo now operates 3 separate mobile apps that all allow you to capture and share video. The multi-app strategy has certainly become a trend as of late—Facebook, for example, runs both Instagram and WhatsApp.

I’ve long been a Vimeo user, but it has always felt like an afterthought compared to YouTube and other social apps. I’m interested to see if these acquisitions are an indication that the company has bigger plans in the offing to up its presence in the space.

At any rate, if you’re interested, you can download Vimeo here and Cameo here. Both apps are free.