The App Store hosts a myriad of utilities to measure your favorite app’s cellular data usage after downloading, ranging from DataMan Next to Apple’s own per-app measurements in Settings > Cellular. However, no tool existed to estimate an app’s data usage before downloading it.

A website launched by CTIA on Thursday, an industry trade group that represents the international wireless telecommunications industry, Know My App features a growing list of popular mobile applications with their respective data usage broken down in several useful categories.

This lets folks on metered cellular plans educate themselves on how much data their favorite app is using when it’s downloaded, at initialization, during active run time and during background time. The website also includes information about how smartphone and tablet owners can conserve data…

Available at knowmyapp.org, the website lets you search for an app by name or browse entries by categories (currently, ‘Games’ and ‘Apps’ only) and operating systems (iOS and Android). Once you’ve zoomed in on your app of choice, the tool gives you detailed usage cases based on specific scenarios.

The example of Facebook assumes a typical one-day usage of three sessions that involve posting five comments, liking five posts, viewing one embedded video and three photos, uploading a photo, checking-in once and scrolling through the Timeline. 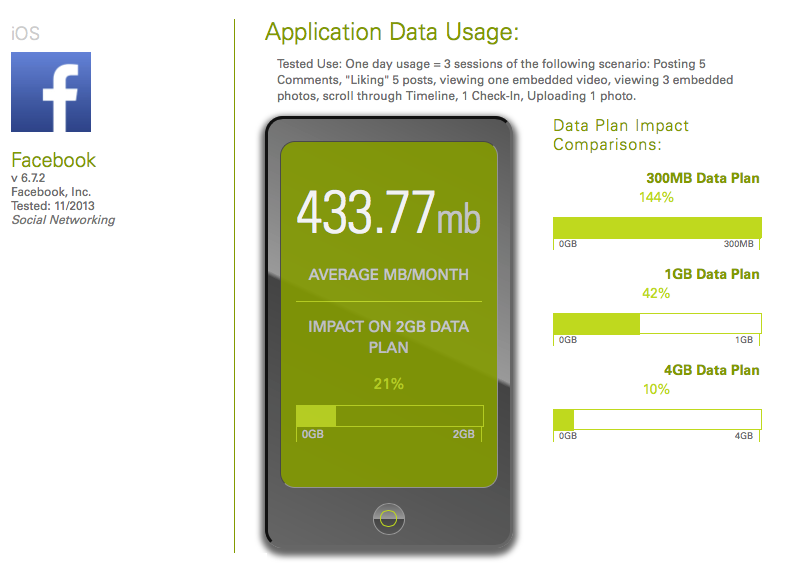 The scenarios differ from one app to another, here’s Snapchat below. Taking into account each app’s specific usage patterns is time-consuming so it should’t surprise you that Know My App launched with about the top 50 paid and free apps from the App Store and Google Play, with more to come. 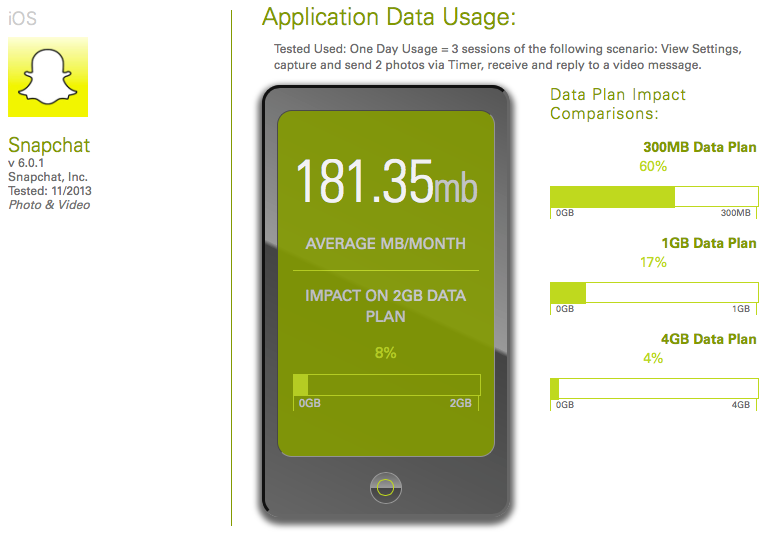 One of the website’s tips on conserving cellular data includes killing apps that aren’t in use so they’re not running in the background, in addition to uninstalling any apps you don’t use. iOS 7 lets you manage each app’s use of background data refresh in Settings > General > Background App Refresh.

As Apple recently lifted the App Store download limit to 100MB per app, tools like Know My App are increasingly becoming indispensable in terms of planning one’s cellular data strategies. I would be lying if I told you my daily workflow hasn’t changed as a result of switching to a metered pay-as-you-go plan a year ago.

For starters, no longer do I download App Store apps on the go unless there’s a Wi-Fi hotspot around. By the way, iOS 7 makes it easy to switch Wi-Fi on and off right in the Control Center, even from the Lock screen, but you still need to dive in Settings in order to flip your Cellular switches.

What I do Instead is use the Share menu to put apps I want to buy later on my App Store Wish List (unfortunately, you can’t put free apps on that list). Besides, I don’t use cellular data for stuff like iTunes Match, iTunes Radio and automatic downloads.

The really interesting bit: my mobile productivity hasn’t suffered much as a result of my newly-found aggressive approach to cellular data usage.

Are you on a metered mobile data plan?

If so, I’d be eager to learn about your cellular data strategies so chime in with your thoughts down in the comments and do share your best tips with fellow readers.