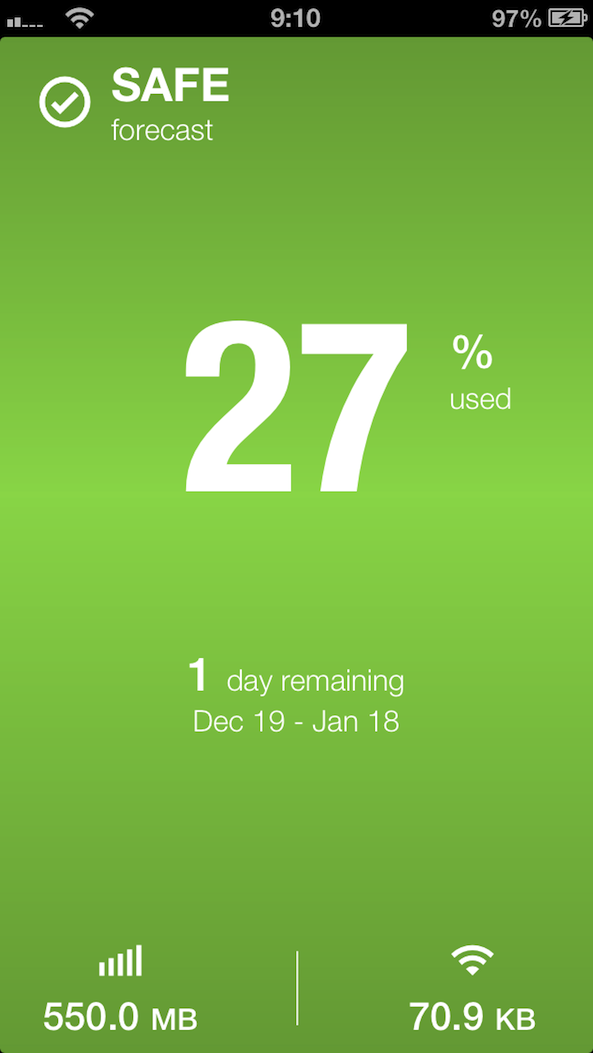 I didn’t care much about cellular data tracking apps until I gave up my unlimited data plan, a couple months ago. Then all the sudden it became important to me to figure out how much data I was using and make sure I didn’t go over my allocated amount. My wife and I share 4GB, and although we’ve historically never been close to using all of that, I like to keep an eye on my usage, just to feel safe.

So I downloaded the DataMan app, which has served its purpose wonderfully ever since as it provided me with real time data usage. One thing always bothered me about this app though: it just looked bad.

But this morning, I received an email from Johnny Ixe, the developer of DataMan, letting me know about his new app called DataMan Next. It serves the exact same purpose as DataMan, except it looks much better. I’d actually go as fasr as saying it looks beautiful, but you might want to see for yourself…

Upon launching the app for the first time, you are asked to enter some basic information about your data plan. After entering your billing date, your monthly data plan cap, and your existing usage so far, DataMan Next is ready to go.

With this new app, emphasis is made on the percentage of data used so far and the Smart Forecast of your data usage until the end of your billing cycle.

Smart Forecast predicts if you’ll stay within your data cap. Its intelligent algorithm uses multiple inputs including your current usage and the remaining days in your bill cycle to compute real-time usage forecasts. This helps you plan ahead and take precautions.

The app is designed in a way that you don’t really have to worry about the numbers. Just look at the background color. If it’s green, you’re all good and you probably won’t hit your data cap. If it’s yellow, you might want to go easy on your data usage for a while. If you’re in the red, all indicates that you will go over your data cap, but of course it is still time to take corrective action, which depending on your case might mean no more Netflix streaming until the end of your billing cycle. 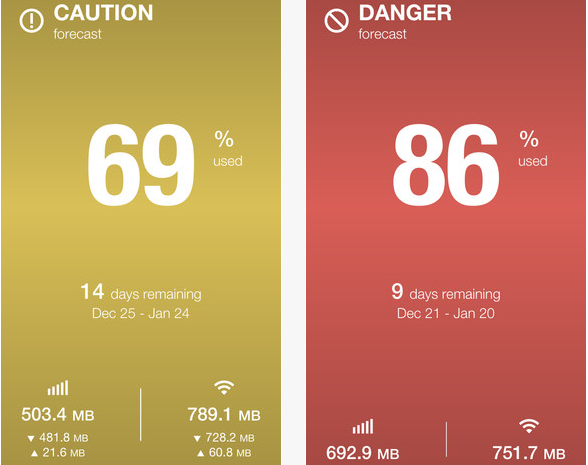 You don’t even have to launch the app to monitor your data usage. You can simply set usage alerts that will notify you when you hit a given threshold. By default, DataMan will alert you once you reach 50% of your allocated data. A second alert will pop up at 70%, a third at 90%, and finally, you’ll be given a last alert once you reach 100%.

One may argue that this app doesn’t do anything the old DataMan app didn’t already do, and that would be correct, except that DataMan Next does it in a beautiful way, and for people who like to pay attention to details, this is a world of difference.

DataMan Next is available in the App Store for the special price of $0.99. I believe it will go up to $1.99 shortly. As for the old DataMan app, it will soon be retired.

Do you keep tab of your data usage? If so, how do you do it?