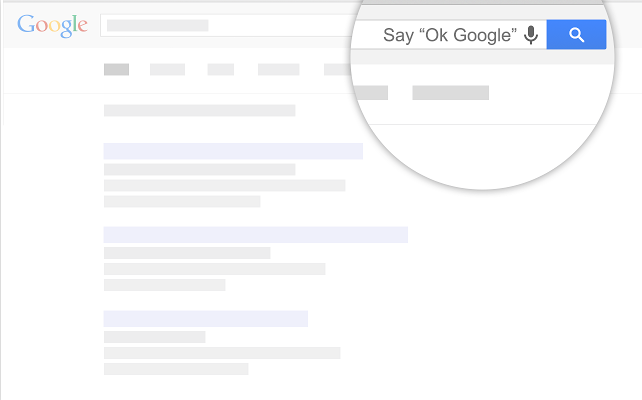 Yours truly is a huge fan of Google Now so it goes without saying I’ve long been yearning for that kind of hands-free voice searching on my Mac desktops and notebooks. Available via Google’s free Search app for the iPhone and iPad since November 5, the cool feature dutifully listens to the ‘OK Google’ keyword which initiates a voice search. It’s severely crippled, too, as ‘OK Google’ only works if the Search app is running, as opposed to the always-on implementation on the Nexus 5 and Moto X.

Blame it on Apple’s strict policy that prohibits third-parties from listening to the microphone input in the background. Well, there are no such restrictions on Macs (yet) and Google has taken advantage of the fact and released a nice little extension for its browser allowing you to talk to Google (when you’re using Chrome) hands-free, no typing required…

“This year, rather than stopping midway through to wash your hands and type in a search, you can just speak to your laptop: ‘Ok Google, how many ounces are in one cup?’”, writes the search monster in a post over at Google+.

You can also say “Ok Google, set a timer for 30 minutes” so you don’t forget to baste that turkey.

What enables ‘OK Google’ hotword detection is the free Google Voice Search Hotword extension, currently in beta and only available to English-speaking users in the U.S.

The 4.7MB download is available by visiting the Chrome Web Store using Chrome for Mac, Windows or Linux. By the way, installing the extension assumes you’re OK with Google’s Terms of Service and Privacy Policy.

There are two options available: you can enable or disable the extension for Google.com search and set it to stop listening for the hotword after five minutes, which helps reduce battery consumption on MacBooks.

When enabled, you should see the microphone icon in the search box when on Google.com. If it’s all gray, you can freely speak your search – just say ‘OK Google,’ followed by your question. Note that Voice Search was previously available in Chrome, but you had to click the microphone icon manually in order to initiate it. 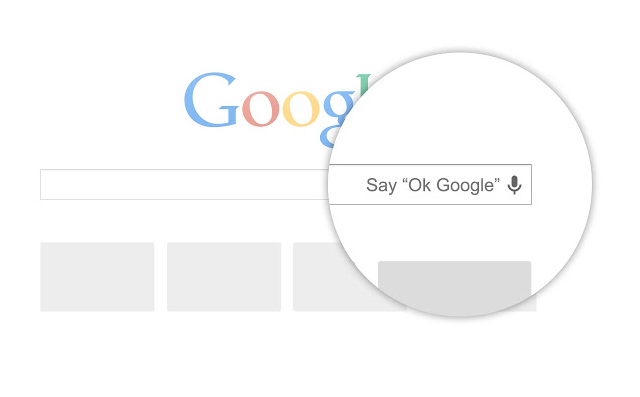 The extension requires access to your data on *.google.com websites, your tabs, browsing activity and of course your Mac’s microphone. However, privacy advocates needn’t worry: your question gets sent to Google only when the extension hears the hotword.

Release notes state that enabling ‘OK Google’ lets Chrome listen for the hotword to “send the sound of the next thing you say, plus a few seconds before”, to Google.

This doesn’t tell me whether my voice is being sent unencrypted over the web, where the NSA can intercept it. For what it’s worth, the extension works without a hiccup on encrypted.google.com.

To get you up to speed, you can try Voice Search with the following examples:

For starters, ‘OK Google’ is unavailable when Chrome is running in the background.

Not that I have any problem with that, but what really bothers me is that hotword detection only works on Google.com. You can’t say ‘OK Google’ when browsing other Google properties on the web such as Gmail or Docs, which is a shame.

Still, it’s a solid start and the feature will only get better over time.

Even in its current beta incarnation, the extension saves ton of time by letting you set reminders, check quotes, perform simple calculations and more, all hands-free. I expect ‘OK Google’ to eventually trickle down to the stable Chrome release just as Search by Image was originally an extension, but now is part of Chrome.

What I’d really, really prefer is a native app sitting in the Mac menu and always listening to the hotword, regardless of whether or not Chrome is running. Also, how about an OK Google Safari extension?

If you’re fan of Chrome, Google has more goodies in the works.

For instance, we’ve suspected for some time now that Google Now is coming to Chrome for Mac because the latest leaks have pointed to Google Now cards and rich web notifications in desktop Chrome.

What do you think about this extension?

Can you fathom yourself conversing with Google on your Mac?

For more on how Google and Microsoft got everybody talking to their gadgets, I’d suggest Mike Elgan’s excellent write-up over at Datamotion.