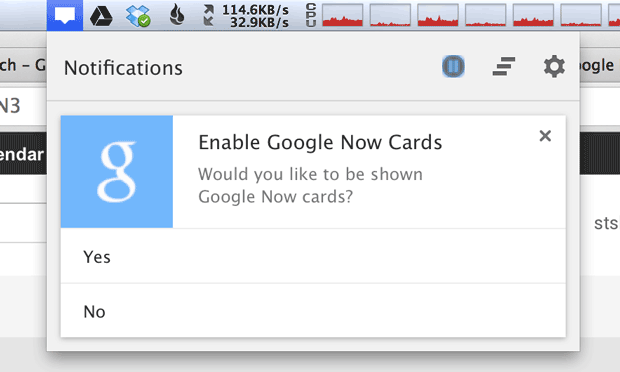 After being caught on the wrong foot following Apple’s introduction of the Siri personal digital assistant in October 2011, the Internet giant Google responded by launching Google Now. Mostly owing to a series of missteps, controversial advertising and ongoing reliability issues with Siri, Google has managed to rapidly leapfrog Siri.

But the search monster isn’t stopping there, it wants people to use Google Now no matter the device or platform. After adding Google Now features to its native Search iOS app, Google Now cards are coming to a desktop near you via the Chrome browser…

As shown in the screenie top of post obtained by CNET, Google Now cards are likely heading to Google’s Chrome browser. A pop up in the developer edition of Chrome for Mac and Windows asks users ”Enable Google Now Cards — Would you like to be shown Google Now cards?”

Both Chrome and Chrome OS have had a flag to enable Google Now for weeks now, but this is the first time the feature connected to an actual Google server, CNET’s Stephen Shankland writes.

I got the prompt to enable Google Now for Chrome through a menu bar item on OS X 10.8 and a status bar item on Windows 8.

Though it’s not yet clear if notifications are actually active, the fact that Chrome is asking people to enable the service shows Google is making steady progress toward that goal.

On the Windows side, Chrome also features a tray icon where you can choose which apps and extensions can send alerts. It would seem Google is opening up its notification technology because services allowed to send notification includes Gmail, Twitter, Google Calendar, Tweetdeck, Amazon Cloud Reader and The New York Times.

For what it’s worth, Chromium evangelist François Beaufort recently confirmed that Mac users “will be happy to know that rich notifications are being implemented on Mac”.

The image is from the developer edition of Chrome so the feature isn’t ready for prime time yet. Google typically tests features with Chrome developers before making them available to users on Chrome’s Beta channel.

There is no guarantee that a feature tested in the developer edition of Chrome will trickle down to the Beta and then Stable Chrome channel as some early features tested with developers never made it into the stable release.

It will be interesting seeing how Apple responds to this.

Although the company brought the native Maps app to the Mac in OS X Mavericks, Siri hasn’t made a jump to the Apple desktop apart from the dictation feature.

Some have suggested that Apple will enable Siri in OS X and bring the personal digital assistant along with the Maps app to the web, allowing anyone with a web browser to ask questions using their voice and plot routes.

Unfortunately, it all remains in the realm of speculation as there’s no solid evidence to substantiate these claims.

For now, Maps and Siri remain exclusive to the Apple ecosystem.