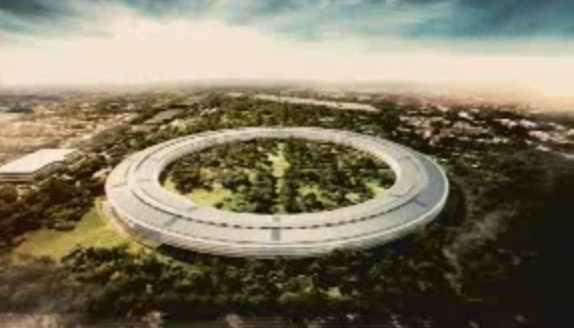 If no more hitches appear, the new Apple headquarters will go to city council later this month with final thumbs-up or thumbs-down in November…

According to CNET, the Cupertino planning board was regaled with a slick video, including remarks by the project’s architect noting the current spaceship-like o-ring design was “born out of an intensive process.” If the city on May 19 gives final approval to the project expected to cost about $5 billion, Apple could move into its new HQ in 2016.

Aside from the outside “spaceship” design, the project has been legendary both in scope and repeated overruns. Apple co-founder Steve Jobs, just months away from passing away, went before the city council in June 2011 to plead his case for his pet project. By December of that year, Apple had already begun revising its plans. Along with pushing the cost $2 billion above budget and repeated construction delays, the “spaceship” campus originally inspired by Stanford’s campus took on some very Apple-like proportions.

Consider the building’s size: four stories and 2.8 million square feet (the U.S. Pentagon, for comparison, has 6.5 million square feet). The number of employees the new headquarters will house has also ballooned to 14,000 – up from the original 6,000. Just meeting Apple’s design specifications has cost a pretty penny. For example, 2 square miles of curved glass and polished concrete ceilings that are pre-cast in molds rather than cast on the spot. Curved glass seems to be a fascination of Apple. A recent patent application described the process Apple developed to build a glass cylinder for its China store in Shanghai.

Then there are the additional elements, bikeways and more, down to a cafeteria (actually a 600-seat restaurant) serving apples grown in the company’s own orchard.

“The proposed structures include an auditorium for product unveilings, a four-story parking garage, and a fitness center,” according to CNET.

Given all this, why would Cupertino question the benefits of such a project? To answer the question, Apple earlier this year produced an economic impact report, detailing the number of jobs the project expects to produce, as well as new revenue for Cupertino coffers.