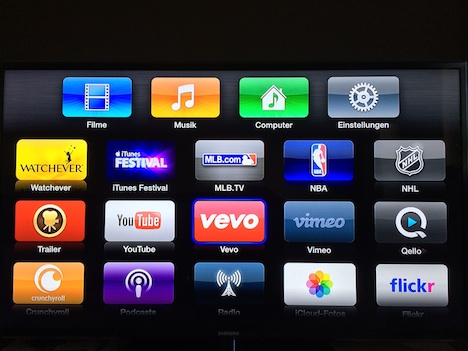 Although Apple has updated its Apple TV box a few times this year, making it much more useful by enabling a bunch of additional channels, most of the premium content sources are limited to users in the United States due to licensing restrictions. A good example is Netflix, which just rolled out crisp Super HD video streaming that’s unfortunately of little use to the folks living outside the 41 Netflix-supported markets around the globe.

It’s not just paid streaming services: some of the most popular free channels come region-restricted as well. Take Vevo, for example, which got added to the $99 streamer late-August but did not work in all regions. In a sign that Eddy Cue and his team have been able to negotiate a better deal, Apple TV users in Germany are now reporting sightings of both Vevo and NHL channels on their device…

As first reported by the German blog Macerkopf.de, Apple TV owners in Germany can now stream 24/7 music videos from Vevo and enjoy sports content by the hockey channel NHL GameCenter. The latter has been available in many Apple TV markets for two years now, recently becoming accessible to users in France.

Last October, the iPhone maker flipped the switch on local TV shows in the Cloud for Apple TV owners in Germany and Switzerland.

And earlier this year, German customers were treated to exclusive content from Watchever, a local Netflix-like streaming service that offers unlimited access to local, European and international movies and TV shows for €8.99 a month, or about $12 USD.

Back in the United States, in a major push earlier this year Apple TV users gained such streaming sources as Major League Soccer and Disney Junior, ESPN’s News and Deportes, as well as The Weather Channel, Disney, Smithsonian and much more.

Topping it all off, we recently heard whispers about Disney ostensibly considering a Star Wars streaming channel for the set-top box. And if the well-informed TechCrunch columnist MG Siegler is right, there will be a new Apple TV hardware later this month.