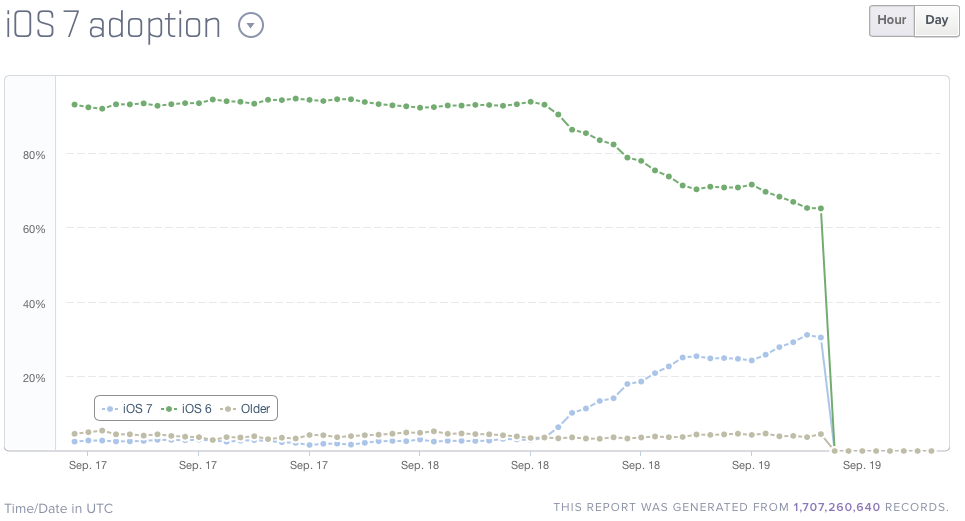 Adoption of Apple’s new version of iOS is off to a fast start. Nearly a third of iOS device owners have already upgraded to iOS 7 just 16 hours after the software was released. According to Mixpanel, by Thursday at 10:28am ET some 31.8 percent of iPhones, iPads and iPods had adopted the new operating system, noted for its flat design and a number of new features. Apple officially released the software on Wednesday at 1pm ET…

The Mixpanel announcement can be found here.

Go here for the interactive chart of iOS 7 adoption

By comparison, 24 hours after iOS 6 was released just fifteen percent of iOS device owners had adopted the new OS. Rival platform Android is saddled with a reputation of being fragmented due to the slow pace of OS adoption.

Compare this to Google’s most recent snapshot of Android OS version distribution.

As you can see, less than half of Android devices (or 45.1 percent) were on Android Jelly Bean version 4.1.x or 4.2.x, per data collected during a seven-day period ending on September 4, 2013.

In this week’s Bloomberg Businessweek cover story, Apple CEO Tim Cook mentioned both a NetAppliations survey that gave iOS devices a 55 percent share of all mobile web activity and an IBM research note saying iPads accounted for more than 88 percent of online shopping traffic from tablets during last Black Friday:

“For us, it matters that people use our products,” he said

And commenting on the widespread Google fragmentation, Cook said:

Indeed, for developers, the solid support of iOS 7 means they can be assured apps written for the latest version of Apple’s mobile OS will be widely installed. While the vast majority of Apple’s user base quickly adopts the latest and greatest version of iOS, some people still use older hardware.

For them, Apple’s made it possible to download the last app version that was compatible with their hardware and iOS build. Also, the company today issued a note telling developers they can easily manage availability of apps’ previous versions using the iTunes Connect web portal.