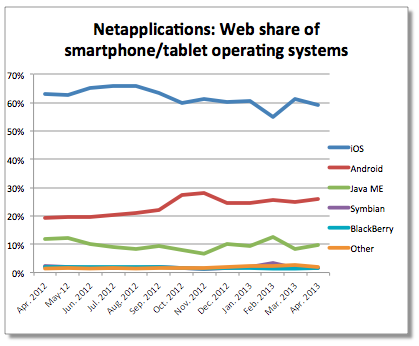 Despite Apple’s iPad growing 65.3 percent year over year, the company’s share of the total tablet market dropped from the 58.1 percent a year ago to an IDC-estimated 39.6 percent during the first quarter of this year, largely thanks to Apple not participating in the sub-$300 segment.

In other words, one out of each four mobile devices used on the web are Android-branded, though Apple’s iPhone and iPad still account for a commanding 59.4 percent of the Internet’s traffic generated by mobile devices…

According to NetApplications data shared Wednesday and highlighted by Philip Elmer-DeWitt over at Fortune, Apple’s share of tablet/smartphone web usage declined 5.6 percent in February 2013 before gaining 6.5 percent in March 2013.

“NetApplications doesn’t offer an explanation for either anomaly, and there may not be one beyond random statistical noise,” De-Witt noted.

NetApplications derives its web usage numbers based on visits to the 40,000 web sites that participate in its network. 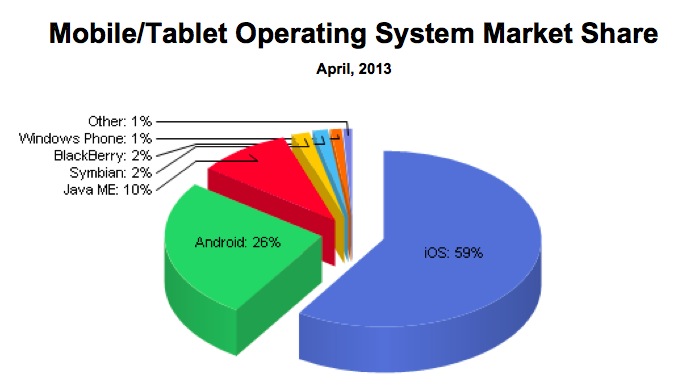 As you can see in the above pie chart, Windows Phone has finally managed to beat BlackBerry, though Microsoft mobile platform is still far behind Google’s Android and Apple’s iOS in terms of web usage share.

As for Android’s growth, the rise of really inexpensive Android tablets coupled with Samsung’s increased distribution for smartphones that consequentially resulted in improved availability of its tablets, explains the platform’s web usage share gains.

According to IDC, while Apple’s iPad sales grew 65 percent, Samsung’s shipments rose 280 percent. In turn, the iPad’s market share dipped below 40 percent for the first time. One caveat: Apple’ quarterly earnings disclose iPad sales, but Samsung’s do not so IDC’s Galaxy shipments are actually estimates. 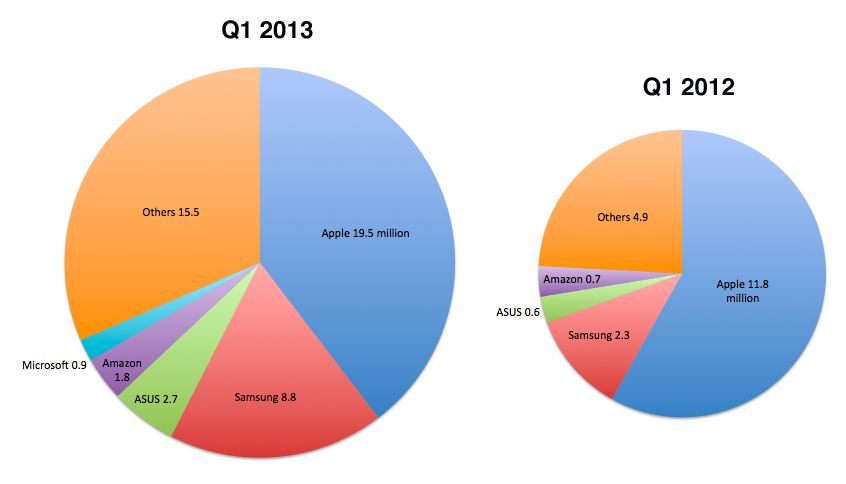 However, that particular survey should be taken with a grain of salt as Kantar’s parent firm, UK-based WPP Group, has a marketing deal with Samsung, the top-selling Android smartphone maker.

No matter how you look at it, Android’s web use is disproportionally small compared to the platform’s growth in terms of shipments. So despite owning well over 50 percent of the mobile market, Android still generates less traffic on the web versus iDevices.

To me, this is yet another indication that Apple’s users are more active on the web and use their devices frequently. Oh, and Apple must be doing something right because iOS in March 2013 rose nearly seven percent in NetApplications data versus the previous month.