Some intriguing numbers were released Monday on how one research firm views the smartphone race between iOS and Android. According to Kantar Worldpanel ComTech, Google’s Android averages a 64 percent unit share of the smartphone market across ten countries.

Apple leads in Japan while Android’s doing its best in Spain, where the mobile software owns an astounding 93 percent of the smartphone market.

In the U.S., the race is much tighter, with Android holding 49.3 percent and Apple owning 43.7 percent of the domestic market. But the rivals might be even closer as observers question how accurate Kantar is, given recent iPhone sales reports by U.S. carriers…

According to Kantar, Android gained 1.4 percent of the U.S. smartphone market between March 2012 and March 2013. Apple lost 0.9 percent during the same period, the research firm claims. 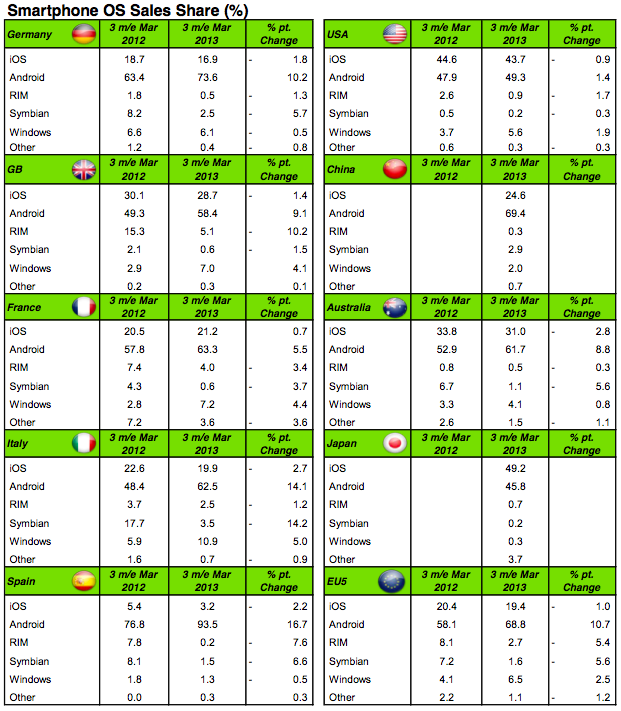 Kantar, however, puts AT&T and Verizon iPhone percentages at 63 and 45.7 percent, respectively, according to Fortune’s Philip Elmer-DeWitt.

“That’s a big enough discrepancy to wipe out the 0.9 percent of U.S. market share Kantar says Apple lost over [the] year,” he writes.

That right there is a reason alone to question the credibility of Kantar’s survey notes.

Earlier this month, analyst Horace Dediu of Asymco commented that Kantar’s survey polls smartphone owners, while other researchers count users. As we’ve written, iPhone owners are more apt to use their smartphone.

Just more reasons why readers need to be critical thinkers and understand 2+2 do not always equal 4.