Verizon just posted its calendar 2013 first quarter earnings. The nation’s top wireless carrier activated four million iPhones on its network throughout the quarter, half of which were the iPhone 5. The figure beats the 3.5 million unit consensus and represents a 25 percent increase over the 3.2 million iPhones Verizon activated a year ago. Representing just over 55 percent of all smartphone activations for the quarter, the iPhone during Q4 2012 represented nearly two-thirds of activations, which isn’t surprising given the holiday rush, iPhone 4/4S price cuts and the iPhone 5 launch hype.

Out of the 7.2 million new smartphone additions, 5.9 million were LTE-ready devices and 28 percent of activations were from users who had defected from other carriers. The wireless biz generated $19.5 billion in revenue, up 6.8 percent from a year ago. 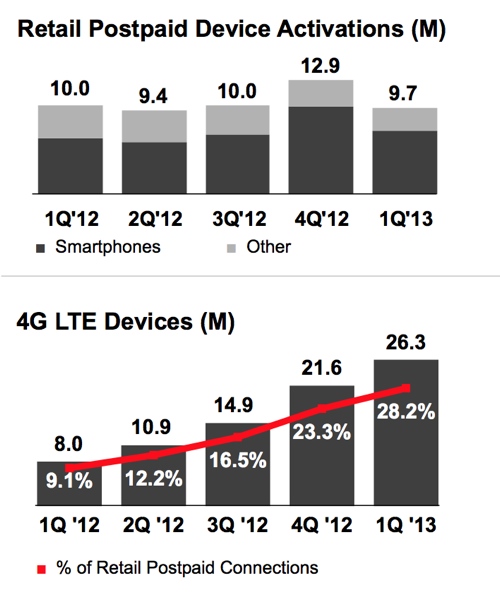 Margins have improved substantially: operating income margin was 32.9 percent and non-GAAP segment EBITDA margin on service revenues was 50.4 percent, both record highs for the carrier.

Here’s Verizon iPhone data for the quarter in context of previous data and other operators, via Asymco. 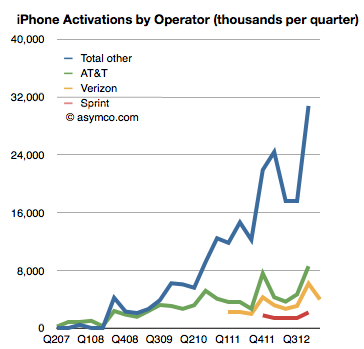 Verizon owes some of its steady growth to shared data plans that went into effect last summer, with nearly one out of each three accounts (30 percent) now on a Share Everything plan.

For the three-month period ended March 31, Verizon recorded a total of 98.9 million retail customers, including both prepaid and wholesale customers. At the end of the quarter, Verizon’s LTE was in 491 markets.

Apple is scheduled to release its own quarterly results next Tuesday, April 23.