Even though quarterly revenues increased 5.7 percent to as much as $30 billion, Verizon reported negative EPS of a whopping $1.48, blaming the decline on pensions and costs associated with Hurricane Sandy. In a conference call with analyst, Verizon’s finance chief confirmed that iPhone activations hit 6.2 million units out of 9.8 million smartphones, or 63 percent. This was the first quarter with full three months of iPhone 5 sales on the Verizon network…

Per CFO Fran Shammo, the remaining 3.6 million smartphones were mostly Android devices. Tablet sales doubled versus the prior quarter and Verizon won’t be adding capacity to its 3G network because most devices shipping today support 4G LTE.

By comparison, Verizon in Q3 2012 activated just 3.1 million iPhones out of a total of 6.8 million new smartphone additions. Only 651,000 of those were iPhone 5 sales, which is understandable because the iPhone 5 had only a week of sales in the September quarter.

Per GigaOM, Verizon’s iPhone 5 sales likely topped more than 3 million units given that half of all quarterly smartphone activations were LTE device.s

Nearly one out of each four accounts, or 23 percent, are now on Verizon’s Share Everything shared data plans, Shammo said.

A media release mentions that Verizon launched three tablets in the quarter: Samsung’s Galaxy Tab 2 and Apple’s iPad with Retina display and iPad mini. The carrier now has 98.2 million retail customers, with 87 percent of its postpaid sales being smartphones. In total, Verizon activated 9.8 million smartphones throughout the quarter. 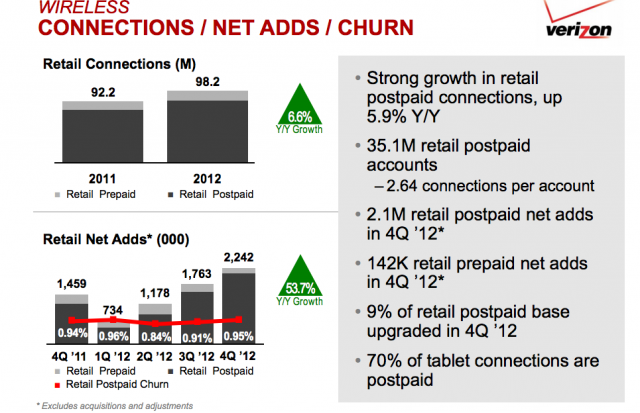 Nearly one out of each four devices on the Verizon network, or 23.3 percent, have LTE, up from 16.5 percent last quarter. All told, over 88 percent of the population, or some 273 million people, now have access to Verizon’s LTE technology. Nearly half Verizon’s entire data traffic comes from its LTE network. Sales of LTE devices hit 7.3 million units in Q4 2012.

Verizon seized growth opportunities in the fourth quarter to cap a year of solid progress across the entire business. We delivered a total return of 13.2 percent to shareholders in 2012, and we enter 2013 ready to accelerate the momentum we’ve achieved and create significant shareholder value in the years to come.

Earlier this month, Verizon confirmed in a SEC filing that it activated 9.8 million smartphones during the holiday 2012 fourth quarter, acknowledging a “higher mix of smartphones”, leading watchers to estimate iPhone activations at 5.3 million units.