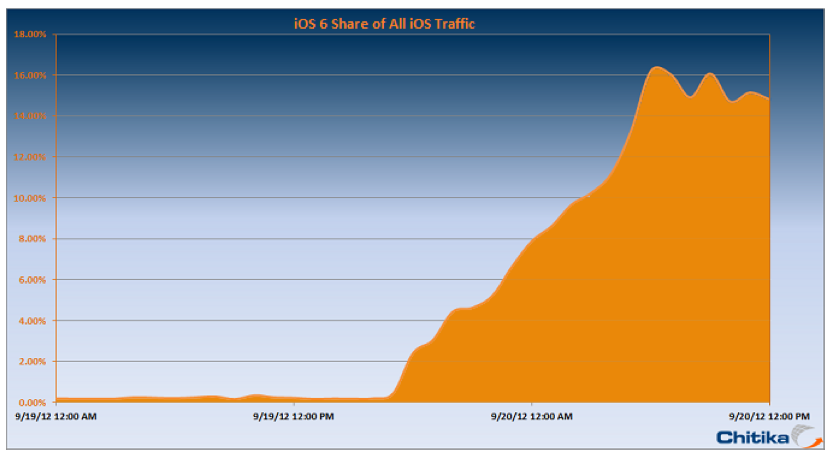 It is no secret that prior iOS releases were deployed fairly quickly across the vast majority of iOS devices in active use. This year’s iOS iteration, iOS 6, is no exception. According to one mobile ads provider, just a day after its public release iOS 6 peaked at more than fifteen percent of all web traffic on its mobile ad network.

More importantly, traffic has remained at that level since. Another non-scientific survey shows a huge spike in iTunes traffic during the hours iOS 6 went live. With more than 400 million iOS devices sold to date, iOS 6 is poised to become Apple’s fastest-growing iOS release to date…

According to a Chitika survey (via AllThingsD), within its first 24 hours of availability iOS 6 peaked at more than fifteen percent of web traffic observed on Chitika’s mobile ad network – and has remained at that level.

Now, this isn’t an accurate representative of the whole market as Chitika derives its data from a sample of third-party apps that incorporate its ad technology. Still, it’s a sign that iOS 6 is quite possibly seeing a rapid uptake.

Another thing to consider: such a massive surge in web traffic data is expected in the first few days of iOS 6 availability as people update their devices and presumably spend more time browsing the web in order to test the various aspects of the new software.

Contrast this to Android 4.1 Jelly Bean which is found on just 1.2 percent of all Android devices, according to Google’s own data collected during a 14-day period ending on September 4, 2012. 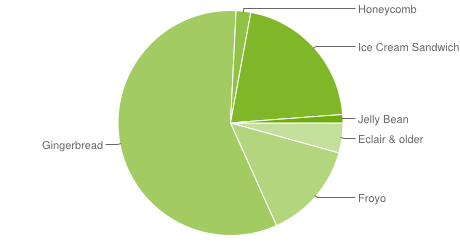 By comparison iOS 5 took about three days from its October 12, 2011 release to hit the 15 percent mark.

The above chart taps data from fixed access networks in the U.S. to show a comparison of iTunes and Mac App Store traffic on Wednesday, September 19, 2012 versus that of the average levels of the previous two Wednesdays in September.

As you can see, the iOS 6 launch day drove huge spikes in iTunes traffic, another indication of the software’s rapid adoption.

If there are readers out there who haven’t updated their devices to iOS 6 yet, we’d love to learn why down in the comments.