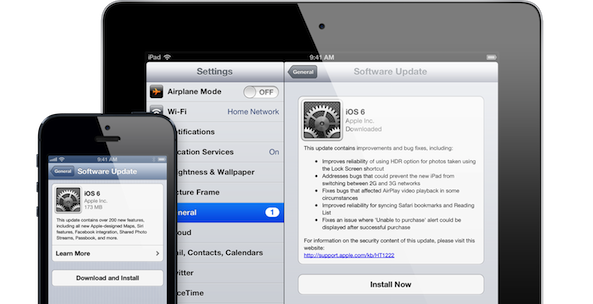 As expected, Apple has released iOS 6 this morning. After months of seeding beta versions of the new software to developers, it has finally made the update available to the public.

iOS 6 is the latest version of Apple’s mobile operating system, and it adds over 200 new features to the iPhone, iPad and iPod touch. But there are a few things you should know before you update.

Note: If you’re not seeing iOS 6 yet, don’t worry. It’s a rolling update, so it will get to you eventually. Also, downloads might be running slow right now given Apple’s servers are slammed…

As aforementioned, the iOS 6 update includes hundreds of new features. But you’ll have to do some deep digging to find most of them. Unlike last year’s iOS 5 update, iOS 6 doesn’t contain much in the way of significant additions.

How often do you use the Google Maps and YouTube apps? Because once you update, they’ll disappear. Apple has replaced Google Maps with its own mapping software, and YouTube has released a standalone application to replace itself.

Other things to know

There are a few other things to consider before you update. For one, iOS 6 has not been successfully jailbroken yet. So if you’re jailbroken, stay away from iOS 6 for now. Also, not all the new features will be available on all devices.

The update should be available via both OTA (over the air update) and through iTunes. We have all the links to iOS firmwares on our Downloads page. For OTA, just open your Settings app and go to General > Software Update to install.

As always, remember to backup your device before you update.

So, who’s updating to iOS 6 today?