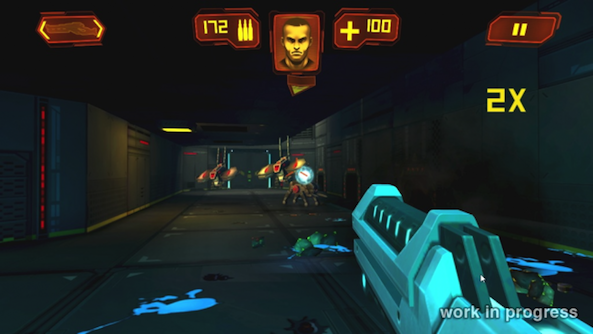 Looking through some of the more popular games in the App Store, most of them appear to feature rather simple gameplay. There’s Bad Piggies, Cut the Rope and Candy Crush, all of which can be played with swipes and taps.

On the other hand, there’s also a number of iOS developers pushing the envelope. And a good example of that is the upcoming Neon Shadow game—a first person shooter that offers same-device co-op multiplayer mode on the iPad…

TouchArcade has the scoop:

That’s not the crazy part though, as Crescent Moon and Tasty Poison have worked together previously on the truly excellent Pocket RPG [$4.99]. No, the crazy thing is that Neon Shadow will feature a same-device co-op multiplayer mode on the iPad, and to my knowledge that’s the first time an FPS has done such a thing on iOS.”

And of course, you have to watch the video:

As the site points out, the game looks very fast-paced, with a lot of action—reminiscent of popular titles like Quake or Doom. And although I have seen same-device multiplayer in other games, this is the first time I’ve seen it in an FPS.

I for one love it when developers think outside of the box—I’m a big fan of the work Rolocule is doing with its Wii-like Rolomotion games. And I can’t wait to see what they can come up with once iOS 7 and its gamepad support lands.

Neon Shadow is expected to launch by the end of the summer.