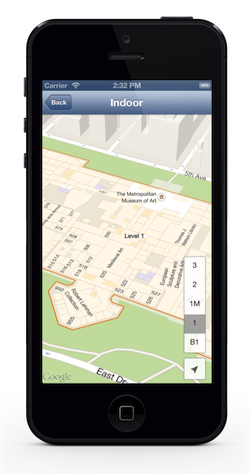 The software has brought native iPad support, offline maps, a much cleaner interface, improved navigation, indoor maps of building floors and other enhancements.

By the way, today’s Chrome iOS update lets you open map links in the Google Maps app instead of the browser.

To go along with the new Maps app, Google yesterday issued a version 1.4 of its Google Maps SDK for iOS. The new frameworks make it easy for Apple’s registered iOS developers to write apps that incorporate such new features as Street View, Indoor Maps, and a new look and feel…

Apps implementing the new SDK will automatically get a new map design inspired by the new Google Maps, for free.

On top of that, the new SDK enables such biggies as support for Google’s Street View imagery with coverage in 50+ countries, indoor floor plans along with a handy floor selector control, the ability to detect the start/end of camera movement and other goodies.

Taking it all in, with this Maps SDK release Google has just widened the gap between its own and Apple’s mapping solution. Although iOS 7 does raise the water level on Maps functionality in third-party apps, features like street-level photography and indoor maps are still notably absent from Apple’s maps offering.

The new Google Maps 2.0 is free on the App Store.