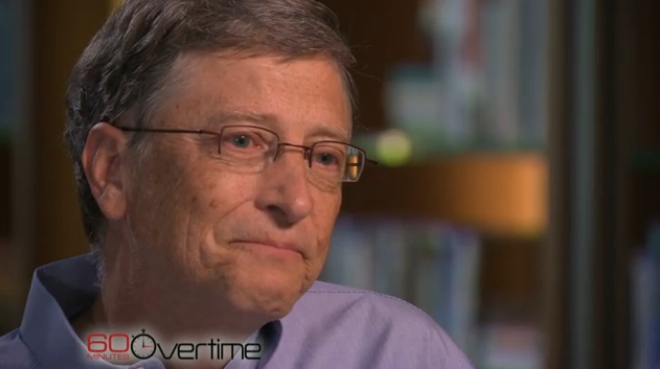 Microsoft co-founder and chairman previously reflected on his meeting with Steve Jobs shortly before his death on October 5, 2011 at the age of 56. According to Walter Isaacson’s official bio book on Jobs, the two talked about their 30-year relationship and rivalry, including the early days of the Macintosh.

Last night, Gates sat down with 60 Minutes’ Charlie Rose to once again recount his final meeting with Jobs. In an emotional outpouring, teary-eyed Gates reflected on the wide range of topics they discussed, including admitting their failure to re-innovate educational through technology. Your video is right after the break…

Here’s the clip, with Gates nearly tearing up when talking about Jobs.

Noting himself and Jobs practically grew up together, Gates noted that “we were within a year of the same age, and we were kind of naively optimistic and built big companies.”

And every fantasy we had about creating products and learning new things – we achieved all of it. And most of it as rivals. But we always retained a certain respect and communication, including even when he was sick.

“He showed me the boat he was working on,” said Gates, “and talked about how he’s looking forward to being on it, even though we both knew there was a good chance that wouldn’t happen.”

On one occasion, Jobs due to this rapidly progressing illness had to cancel a dinner with Gates at the last minute. “If he wants to know why,” Jobs allegedly told Gates’ secretary, “just tell him I’m an asshole.”

Gates also acknowledges that Apple’s co-founder wouldn’t lose spirit despite being in the terminal phase of his illness. He said Jobs “knew about brand” and had an “intuitive sense for marketing, which was amazing.”

His sense of design, that everything had to fit a certain aesthetic. The fact that he, with as little engineering background as he had, it shows that design can lead you in a good direction. And so phenomenal products came out of it.

The Microsoft co-founder thinks Jobs’s accomplishments are amazing given as “little engineering background as he had.”

Jobs once said his goal in life wasn’t to be the richest guy in the cemetery.

He would later repeat the sentiment in describing Gates at the D5 conference, telling Walt Mossberg that the world was a richer place because “Bill realized his goal was not to be the richest guy in the cemetery.”

You can also watch this and other 60 Minutes videos via the official $5 app.