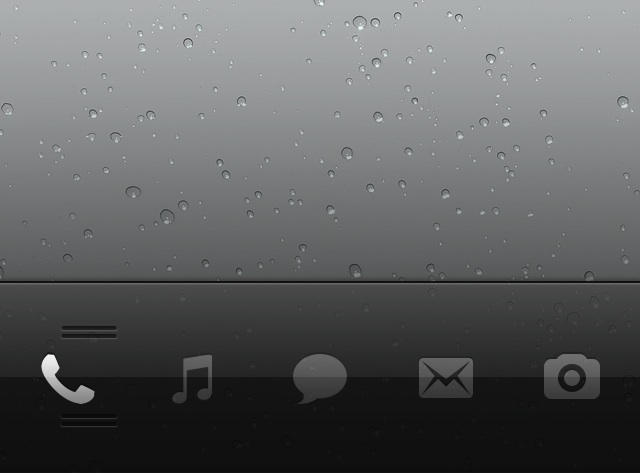 Axis is a jailbreak tweak designed by Sentry, and coded by an enigmatic, but an obviously talented young man by the name of rud0lf77. We’ve had our share of run ins with Mr. rud0lf77 in the past, but talent’s talent, and he’s apparently got some of it.

Sentry really needs no introduction. He’s been a part of a string of hits on Cydia as of late, and has even more in the way of concepts. He’s been the inspiration for numerous tweaks that have made their way to the Cydia store, and he’s showing no signs of slowing down.

At first glance, his new Lock screen launcher tweak may seem familiar to you. It’s actually pretty similar to the aforementioned Grabby Lock screen launcher tweak recently released by Ryan Petrich. In what seems to have been nothing more than a pure coincidence, both tweaks take the same basic idea, but the approach is different enough to make each tweak stand on its own.

Take a look inside, as we break down what makes Axis such an appealing new tweak. We go hands-on in this detailed video walkthrough.

At first glance, Axis looks very similar to Grabby. Like Grabby, it uses the stock Lock screen camera grabber as a basis for its functionality. Where other tweaks incorporate radical design changes from standard iOS, this tweak logically builds on what’s already in existence.

There are some very subtle differences between the way that Grabby and Axis allow you to select the app that you wish to launch. Grabby features a couple of options — you can slide over the app icon and release, or slide over and then slide up. Axis only allows you to use a slide over and slide up gesture, but it differs in the way that your cursor “snaps” to each app on the Lock screen. Viewing the video will help you to see what I mean, but I must say that I prefer the snapping action featured in Axis. It leaves no doubt as to which application you intend to launch. 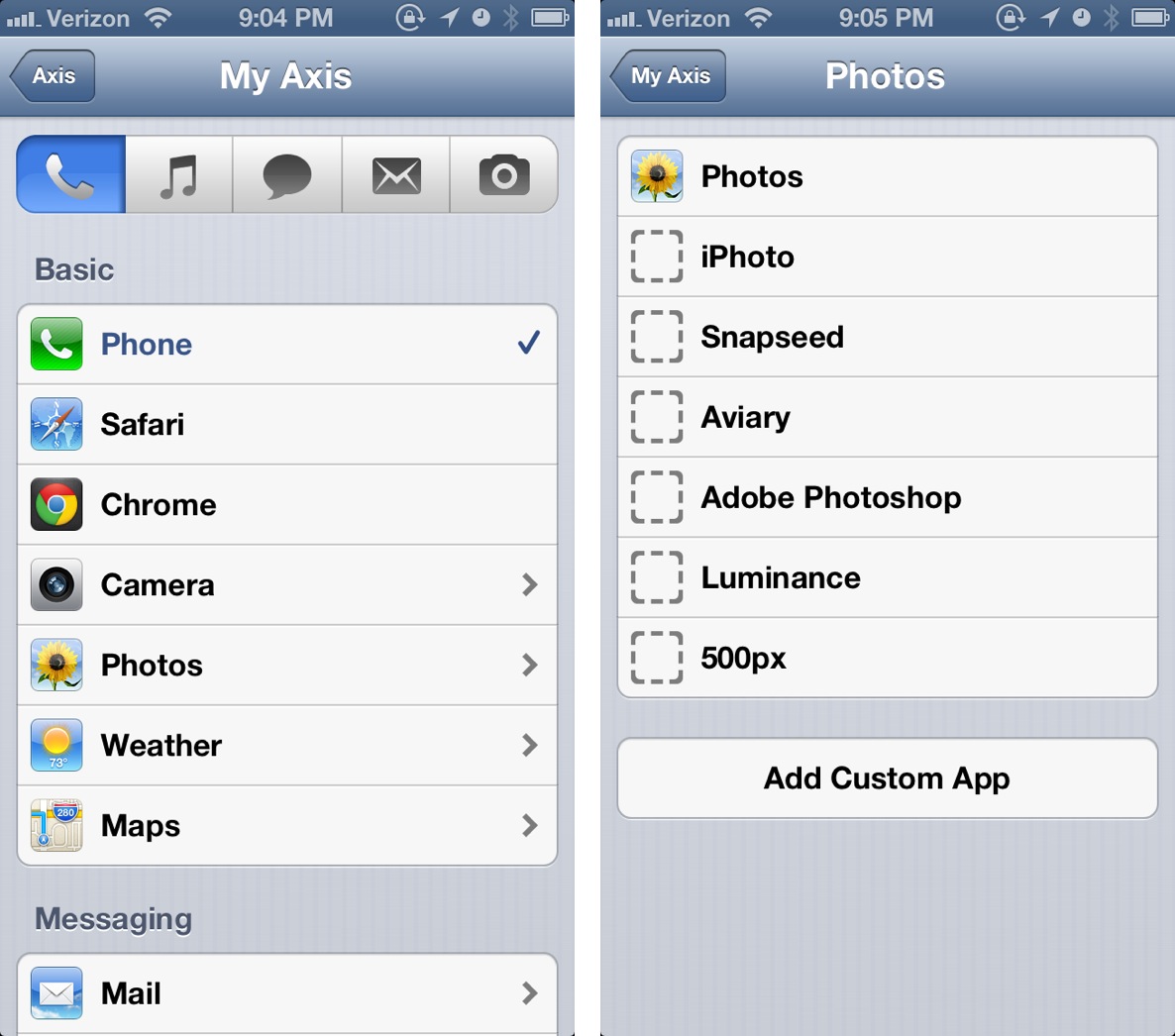 Another thing that I appreciate about Axis is the simplicity of its settings. This is something that has become sort of a staple of tweaks designed by Sentry, and it makes it easy to configure the tweak to you liking.

Axis’ settings feature the five Lock screen launcher app icons at the top of the screen, and each can be customized according to the apps that you wish to appear. The settings are broken up into different sections, logically arranging the different applications by means of category. You’ll find basic apps, messaging apps, social apps, productivity apps, etc.

To customize the launcher app icons, simply tap the icon at the top of the screen that you wish to customize, and select it from one of the categories below. The nice thing about Axis is that it features built-in support for quite a few custom app icons designed by Sentry himself. Axis can even recognize which apps you have installed on your device, and displays a list of other apps that feature custom icon support as well. Yes, you can add an app regardless of whether or not it features a custom icon. In that case the app icon featured on the launcher will default to one of its standard generic icons.

Unfortunately I do have to say that it’s not all sugar and bunnies. I do have one complaint, and it may prove to be a deal breaker for some of you, at least initially. If you use a passcode, regardless of what time intervals you use to configure it, you’ll have to enter that passcode every time you want to launch an app using Axis. Yep, it doesn’t matter if you don’t require a passcode for 15 minutes, it will still ask for the passcode if you launch an app using Axis. The only exception to this rule is when you have iOS’ stock camera configured as one of your launch apps. 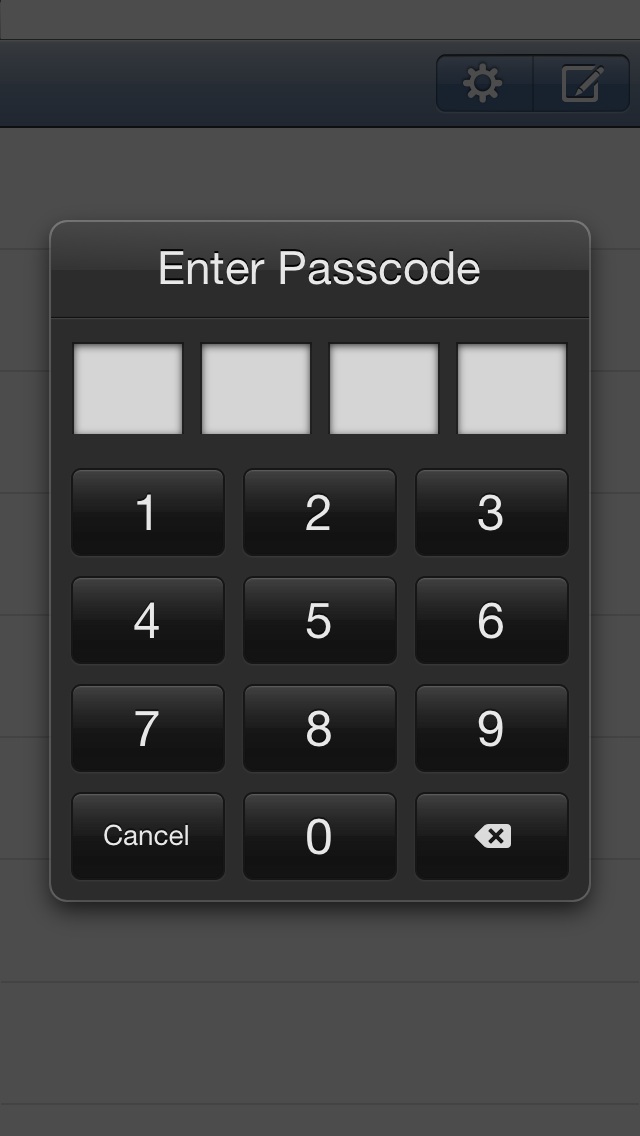 After talking to Sentry, he says that future versions will fix this issue and that you’ll be able to use passcodes on an app by app basis. Yes, it’s a disappointing thing to encounter for such an awesome tweak, but that’s the reality this early in the game. The good news is that the issue should be fixed in a future version of Axis, and by then you’ll gain even better functionality.

Axis is a tweak with huge potential; it can easily be the best Lock screen launcher on iOS with a few refinements. Its design is impeccable, and its settings are simple and straightforward. If the duo can iron out the passcode issue and continue to refine the tweak, then I don’t think it will have any problem claiming its stake as one of the best Lock screen launchers available.

Axis is available right now on Cydia’s BigBoss repo for $0.99. What do you think?