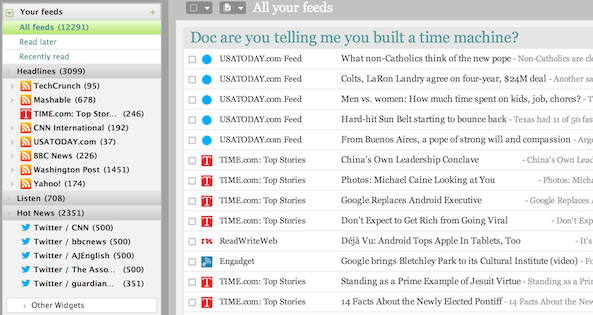 Google sent shockwaves throughout the tech world yesterday when it announced that it would be killing off Google Reader this summer. Despite a recent decline in usage, a number of people, and apps, still depend on the service.

But never fear, as usual, iDB has you covered. We’ve done all of the leg work, and put together a list of 10 Google Reader alternatives. And by the time you get done reading through them, you’ll be saying “Google what?”

Below are 10 viable, or soon-to-be viable, replacements for Google Reader (in no particular order).

It’s worth noting here that most of the services listed above have put up instructions on how to port your Google Reader account over. So, barring sluggish load times due to the influx of traffic, the transition should be fairly painless.

In Google’s blog post yesterday, it said that it would be closing down Reader on July 1st, giving you a little over 3 months to find a replacement. That is, unless the White House can convince Google to keep the service up and running.

Update: Ok, you guys have shared some great options of your own down in the comments, so we’ve decided to add them to our list:

Know of another great service that hasn’t been mentioned yet? Tell us about it in the comments and we’ll add it in.