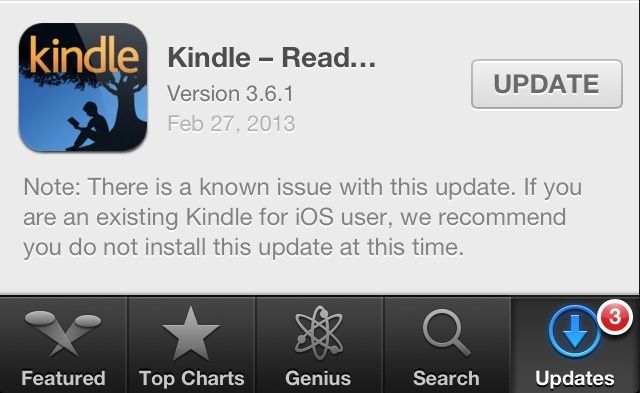 In addition to refreshing its Cloud Player software with a brand new iPad interface and other features, online retailer Amazon last night pushed an update to its Kindle client for the iPhone, iPod touch and iPad.

Hopefully you haven’t had a chance to hit the Update button yet, because Kindle version 3.6.1 for iOS has a nasty bug which will delete your entire book library on your device. Of course, all your purchases are still safely available in the Amazon cloud.

The company has acknowledged as much in the app’s release notes on iTunes. “There is a known issue with this update,” the note reads. “If you are an existing Kindle for iOS user, we recommend you do not install the update at this time”. There, you have been warned. The company issued a statement confirming that it’s come up with a fix and a new version is underway.

Some affected users took to iTunes reviews to express their angst.

“Thank you new update for erasing all of my saved settings,” one user wrote. “Now I have to go through my hundreds of books to find the ones I haven’t read and change all of my screen settings.”

Unless you’re as aggressive about downloading iOS app updates as I am, you should be on the safe side as long as you don’t hit the Update button.

Amazon told AllThingsD it is aware of the issue and is working on a fix:

We have identified an issue with the app update that may cause your app to become deregistered. To register, enter your Amazon account e-mail address and password and all your Amazon content will be available in the cloud.

We have submitted an update fix for this issue and are working with Apple to release.

According to MacWorld, a Kindle iOS update fixing the account deregistering has already been submitted to Apple.

Amazon has told us that an update for the Kindle app, fixing the account deregistering, has already been submitted to Apple.

Kindle is a free universally binary download for all iDevices.

Again, do not update to Kindle version 3.6.1 until Apple’s reviewers release the just submitted build that squashes this annoying bug.

Valentine’s Day Kindle update has brought out new features such as multicolor highlights and book end actions. Carried over from previous updates: X-Ray for Books and X-Ray for Textbooks, two major enhancements that augment your experience by providing additional content information from trusted sources like IMDb, Wikipedia and more.

The online retailer also has a nice iPad version of the Audible app for managing and listening to your audiobooks.