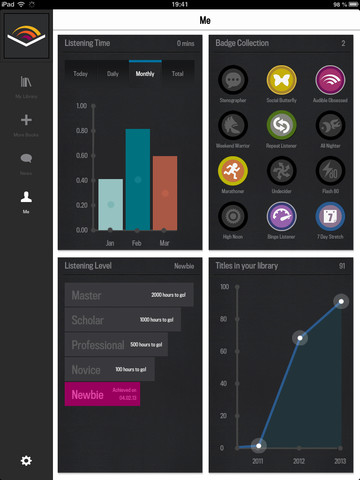 In the speeded up world I’m increasingly finding myself listening to audiobooks because I just don’t have the time for long reads. Besides, reading is rarely a background activity.

That’s what I love about spoken word: it saves time. I can enjoy my audiobooks while jogging, cooking, commuting and what not. Heck, I sometimes even listen to audiobooks while I simultaneously blog about technology.

Amazon-owned Audible sells some awesome digital audiobooks, radio and TV programs and today they’ve finally launched an iPad app. And let me tell you, it’s been a worthwhile wait.

Of course, the Newark-based company has had an iPhone app in the App Store since July 2010. That piece of software, too, has received a major refresh today, bringing out a revamped interface, quick sign ups / sign ins and other tidbits…

The iPad version really lends itself nicely to the 9.7-inch canvas.

The interface is crisp on Retina devices, with big beautiful thumbnails comprised of your content cover artwork. Navigation is more intuitive than before and includes quick search and new library filtering options.

For example, you can now mark titles as finished and hide them in the library view. It’s also now simpler to get going by signing in using your existing Amazon account.

The iPhone build has also received a major redesign and now features the same quick sign-ins and sign-ups like the all-new iPad build.

Both versions provide quick access to your cloud library and the ability to download audiobooks over Wi-Fi or retrieve the first fifty megabytes worth of a title over your iPhone’s cellular connection. 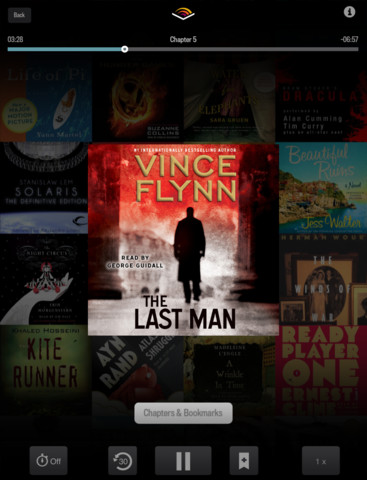 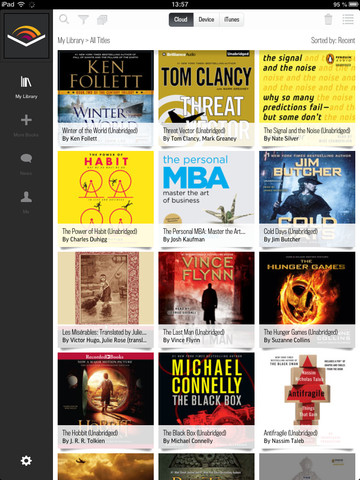 According to a media release, more than one out of each five Audible customers previously used Audible’s blown up iPhone app on the iPad. The iPhone app is currently ranked third among apps in the US App Store books category.

Per Apple’s rules, the program lacks a built-in content store so you’ll have to purchase spoken material through Amazon’s or Audible’s web site before accessing it via the app.

Audiobooks from Audible is now a universal binary for iPhones, iPods and iPads and still a free download from the App Store.

By the way, Audible in 2003 cut an exclusive deal with Apple to provide their catalog of audiobooks on the iTunes Music Store, encoded with an MP4 variant and named with a .m4b extension.

If you have never listened to an audiobook, you’re missing out on a remarkable experience. Granted, spoken word isn’t everyone’s cup of tea, but you should at the very least give audiobooks a try.