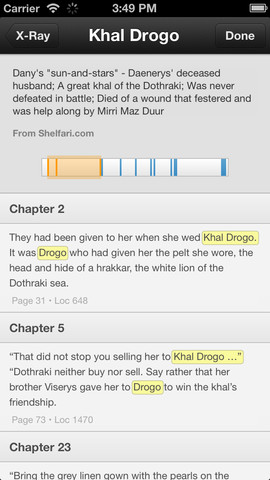 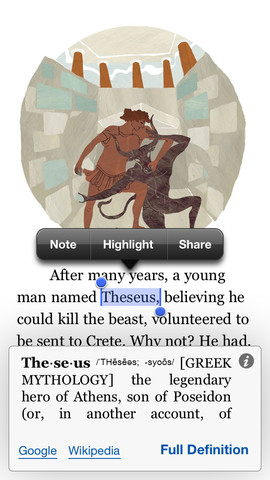 After updating its Kindle e-reading app for the iPhone and iPad last month with the X-Ray for Textbooks feature, the online retailer Amazon today refreshed the software, having added the useful X-Ray for Books capability. Basically the “bones of the book”, as Amazon puts it, X-Ray for Books helps you learn more about notable characters, places and phrases with nice descriptions from Shelfari.com and Wikipedia. In addition to this feature, the new Kindle app also boasts Manga image rendering improvements, per iTunes release notes. The new Kindle app is still a free universal binary and it looks great on all iOS form factors, including the iPad mini…

Amazon back in September refreshed its Kindle lineup, adding a number of interesting software features. Among them: X-Ray for Books, Textbooks and Movies.

X-Ray support for Books and Textbooks intelligently retrieves additional information when you tap an on-screen object, like a movie character, book passages, glossary and what not. It also pulls related data from Wikipedia and YouTube to enhance your e-reading experience.

With today’s update, Amazon’s Kindle app for iPhones, iPads and iPods now works with both X-Ray for Books and X-Ray for Textbooks.

X-Ray for Movies, which isn’t yet available on the iOS platform, allows viewers to learn more about the movie’s cast and characters by just tapping the screen, which produces relevant content by cinema site IMDb.

Did you try X-Ray features on your device?

What did you think?