There is now confirmation of what we already suspected: Apple is killing it when it comes to mobile video. The iPhone, iPad and iPod touch collectively account for 60 percent of mobile video, with Apple’s smartphone and tablet comprising more than half of all mobile clips viewed during 2012, according to a study released Wednesday. By comparison, 32 percent of Android devices are used for viewing mobile video.

That’s another acknowledgment of both Apple’s tablet dominance and the fact that owners of Apple mobile gear use their devices more often than their fellow Android-totting counterparts. In 2012 alone, mobile video viewing grew sixfold versus the previous year as mobile devices increasingly replace computers as the preferred platform for media consumption…

The bulk of that increase, or 30 percent, happened during the third and fourth quarters of 2012 – about the time Apple released the taller iPhone 5, iPad mini and full-size Retina iPads. 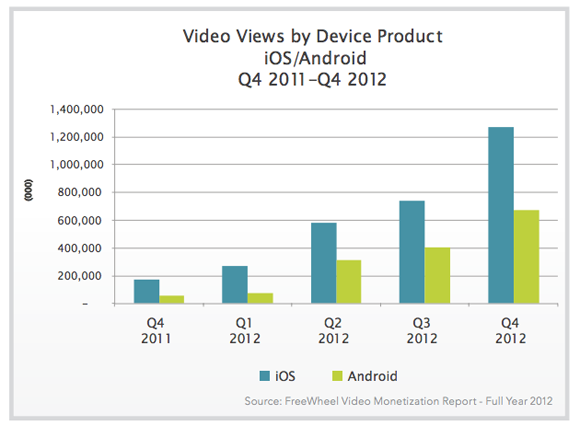 Apple’s strong lead is due to its dominance in the tablet market, where FreeWheel says Android has yet to field a competitor that can truly make a dent in its overall share.

As mobile video viewing increases, we should continue to see Apple’s dominance.

Perhaps the ultimate video win for Apple would be own TV set. A number of rumors have recently floated suggesting an iTV product could indeed be in the works.

Analyst Katy Huberty earlier this week made an estimate that a standalone TV set from Apple with an average selling price of $1,300 could add $68 billion in annual revenue and ten percent penetration of iTunes account holders.