T-Mobile will officially sell the iconic iPhone in three to four months and when it does, the Deutsche Telekom-owned wireless carrier, the fourth-largest in the United States, will be offering Apple’s handset on monthly installments. The struggling telco won’t have to bet the farm by spending billions in upfront iPhone subsidy to Apple and would-be customers will get more bang for their buck in terms of voice and data.

It should be a win-win. Matter of fact, T-Mobile USA’s strategy is “very intriguing” to Verizon CEO Lowell McAdam and AT&T boss Randall Stephenson applauds the idea and says that’s something his company is “going to be watching” going forward.

Should the T-Mobile experiment pays off, it’s entirely conceivable that the US market could finally catch up with the rest of the world by offering non-subsidized hardware and instead focus on more affordable wireless services…

Here are choice quotes from a Reuters report:

Randall Stephenson, CEO of AT&T, Apple’s first partner for the iPhone, applauds T-Mobile USA’s idea. “That’s something we’ve looked at on several occasions. I kind of like that idea,” Stephenson said. “It’s something we’re going to be watching.”

Verizon CEO Lowell McAdam told Reuters T-Mobile USA’s strategy is “very intriguing,” but wondered if consumers are ready to pay full price. An iPhone 5 with 16 gigabytes of storage that is not tied to a contract costs $649 on Walmart.com.

The news gathering organization notes Apple’s grip on carriers may be loosening now that more flagship devices from other vendors are vying for your attention:

Asked whether carriers are now in a better position to negotiate lower prices with smartphone makers such as Apple, Fran Shammo, chief financial officer of Verizon Communications, said having four strong platforms – Apple, Android, Windows and BlackBerry – is leading to more competitive pricing.

Working with Apple is a double-edges sword, notes one executive:

Selling to Apple is “a double-edged sword,” said the executive, who was not authorized to discuss his company’s relationship with Apple. Having Apple as a customer guarantees huge volumes, but comes at the cost of accepting rock bottom prices that can cripple profit margins, the executive said.

That is true – just ask Sprint.

Unlike the subsidized model – which is prevalent in the United States but not so much elsewhere – T-Mobile’s unsubsidized route seems pretty interesting. In a nutshell, instead of getting a new iPhone for $199 in exchange for a pricey two-year wireless contract, you’ll be paying T-Mobile full price for the handset – about $600. 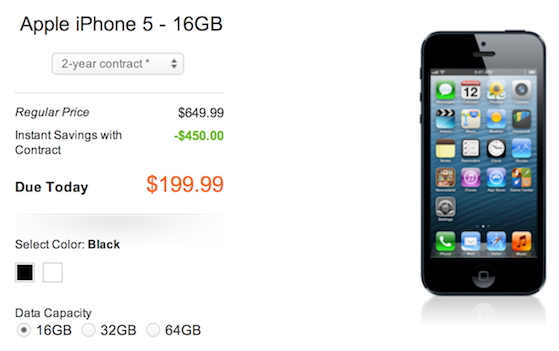 As a token of its appreciation for you absorbing full cost of the device, T-Mobile will offer unsubsidized Value Plans with substantially cheaper monthly rates for voice and, particularly, data plans. T-Mobile is basically keeping the contract with this Value program and passing the money it will have saved from not subsidizing handsets onto you, the subscriber.

T-Mobile closed 2012 by bringing its iPhone-friendly HSPA+ network on the 1900MHz band to as much as fourteen new cities and it now covers over a hundred million people.

We recently learned that the carrier hosts close to two million unlocked iPhones on its network, which should’t be surprising considering it has nano SIMs for the iPhone 5 and provides free support to unlockers willing to bring their iPhone and sign up for one of its unlimited 4G data plans.

So, how would you rather buy your next iPhone: for $199 and with a pricey two-year contract or the T-Mobile way, paying the full price in exchange for more affordable voice and data?