Remember Apple’s Christmas commercial with a girl singing “I’ll Be Home” to her grandfather via FaceTime on an iPad mini? Yeah, it was that memorable – and for all the wrong reasons, cynics might add. Well, bright folks at Amidio certainly did seize the opportunity to take Apple’s idea and one-up it a notch.

Have a look at their version and dare telling me it doesn’t beat Apple at its own game. Here we have a grown up (and cutesy) girl singing the same song, but using Amidio’s Futulele app to also play the tune on her iPad mini. Not sure about you, but I can instantly tell which one I like better…

Pretty nice PR stunt on Amidio’s part, I’ll give them that.

Kudos to Rob LeFebvre of Cult of Mac for spotting this little gem.

Amidio writes in a blurb:

It is not a secret that many iPad owners also have an iPhone, so Futulele is an excellent and innovative reason to get the best musical juices flowing out of both. A special guitar-shaped case holds the two devices, making it possible to select the chord on the iPhone and strum along the iPad screen, just as on a regular instrument.

Changing a chord requires only one tap, and the strumming technique is easy and convenient. No external wires or hardware accessories are needed, since the devices use Bluetooth or Wi-Fi (selected automatically) for communicating.

Check out the graphics. 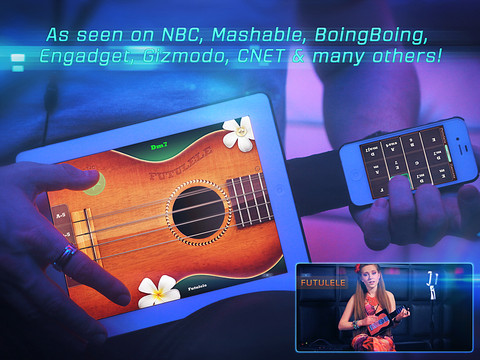 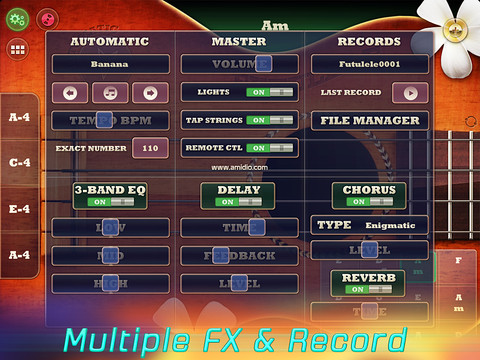 Lots more videos of people playing songs on their iPads can be found at the official web site.

Fukulele for iPad works with Amidio’s player software for the iPhone called Futulele Remote, a free download, which receives chord information from iPad running Futulele and then sends info about the current chosen chord back to Futulele.

As Steve would have said, that’s a typical agency bullshit.

I think it’s safe to say that Amidio one-upped Apple at its own game.

Samsung’s holiday ad – even though it ruined my childhood – also comes across more convincingly than Apple’s lukewarm commercial, in my opinion.

Oh, and Samsung probably won’t miss the opportunity to poke fun of Apple with their upcoming Super Bowl ad attack.

Speaking of advertising, my best holiday ad from Apple still is their last year’s commercial featuring Santa Claus and Siri.

The fact that it’s amusing doesn’t hurt either. Of course, that was before Siri backfired.

There’s this unmistakable Disney feel to that commercial and the warmth of the holiday season that I usually associate with Coke’s Christmas ads.

In fact, if you ask me, Coca Cola has best Christmas commercials, no?