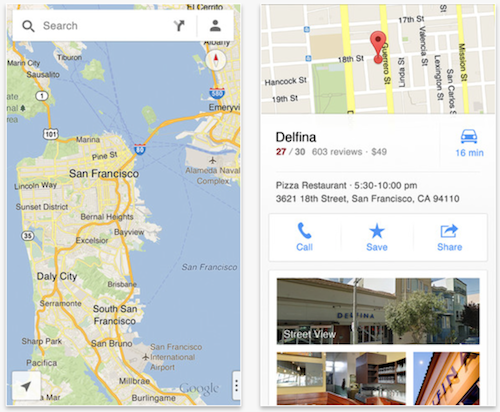 As expected, the official Google Maps app has landed in the App Store this evening. The release comes following a number of rumors, which have been circulating since the summer when it was announced that Apple would be replacing Google Maps in iOS with its own in-house solution.

The app works on the iPhone and iPod touch (no iPad version yet), and includes a number of features such as voice-guided turn-by-turn directions, Google’s exclusive Street View, which allows you to look at locations from street level, and public transit directions. More details after the fold…

“Navigate your world with Google Maps, now available for iPhone. Get comprehensive, accurate and easy-to-use maps with built-in Google local search, voice guided turn-by-turn navigation, public transit directions, Street View and more. Use Google Maps to discover great places to eat, drink, shop and play, with ratings and reviews from people you trust. Sign in to save your favorite places and quickly access all your past searches and directions from your computer, right on your phone.

Search
* Find addresses, places and businesses around the world with Google local search.
* Discover places to eat, drink, shop and play, with ratings and local reviews.
* Sign in to sync your searches, directions, and favorite places between your computer and your phone.

Street View and imagery
* View 360-degree panoramas of places around the globe with Street View.
* See inside more than 100,000 businesses worldwide.
* View high resolution satellite imagery of locations around the world.

Simple and easy to use
* An entirely new Google Maps experience on your iPhone.
* Newly designed and streamlined interface for even easier navigation of your world.
* Use gestures to explore the map and browse results.”

After giving it a brief once-over, I have to say that the app looks pretty good — far better than Nokia’s weak attempt we saw last month. Map tiles load very quickly, and everything about the app feels smooth, including Street View. And location data is great because, well, it’s Google.

Timing couldn’t be better for the app, as the criticism continues for Apple’s Maps. Released in September, the in-house mapping software has been nothing but trouble for Apple, resulting in a public apology, multiple executive oustings, and even a public police warning in Australia.

For the moment, I’m impressed. But we’ll be taking a deeper look at the new app over the next several hours and will return with our thoughts. In the meantime, if you want to check it out for yourself (and it’s definitely worth a look), you can find Google Maps in the App Store for free.

So, what do you think of Google Maps?