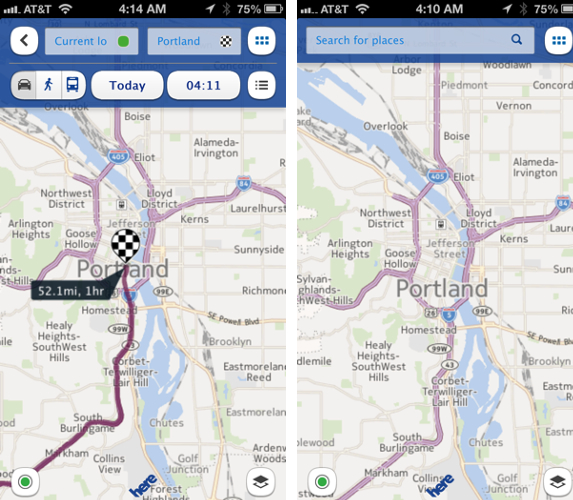 Last week, Nokia’s CEO Stephen Elop told reporters at a San Francisco press conference that Nokia was rebranding their mapping service to Here Maps, and would be releasing a native iOS app for the service within a few weeks.

Today, Nokia has made good on that promise, as its Here Maps app has just been spotted in the App Store. The HTML5-based software includes walking and public transportation directions, and many other features… 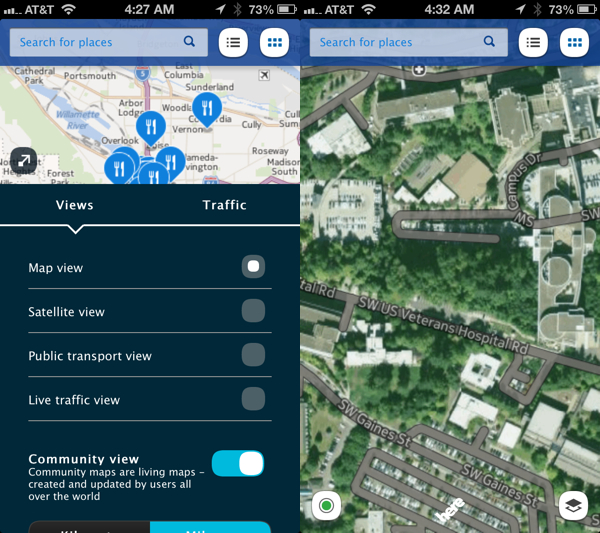 Here’s a breakdown of the app’s more notable features:

Other than that, there aren’t many surprises here. As you can see in the above screenshots, the Here Maps UI is not even close to as good as Apple’s. But Nokia does plan to add 3D views and other options in a future update.

I’ve also noticed that mapping tiles in the Here Maps app can sometimes take a while to load, like minutes. Things seemed snappy at first, but when I switched to Satellite View, it seemed to really slow down the tile drawing.

Obviously, though, the big question here in wake of Apple’s Maps struggles is accuracy. How accurate is Nokia’s Maps app in terms of directions and point of interest data? I haven’t used it for navigation yet, but it seems to see all of my local shops and restaurants.

Overall, in my admittedly short time with the app, I’ve found Here Maps to be a bit underwhelming. I haven’t discovered anything that would make me want to switch away from iOS Maps. But then again, I haven’t been having any problems with it either.

But don’t underestimate this move by Nokia. It’s taking advantage of an interesting situation here. Google has yet to publicly make a play for the native iOS mapping space, meaning at the moment, Nokia is offering the best free alternative to Apple’s struggling Maps app. It’ll be interesting to see how this plays out.

If you want to try out Nokia’s new Here Maps application for yourself, you can find it in the App Store for free.

Have you tried Nokia’s new iOS maps application? Let us know what you think below!