The embattled handset maker Nokia introduced at today’s press conference in San Francisco today some interesting news related to maps. In an attempt to beat Google and Apple to the mapping punch, Nokia tapped 20 years of location expertise and its data sets spanning 200 countries to map out a new strategy which involves a re-branding effort, cool new features and a good ol’ acquisition. Nokia Maps is no more. Henceforth, the new mapping service shall be known as Here.

The new cloud-based map service works across multiple devices and operating systems, it does directions and location, lets people save favorite locations and supports crowd-sourcing by allowing users to report errors and make changes themselves.

The service is based on HTML5 and an iOS app is in the works, pending Apple’s approval. The iOS app will have voice-guided walk navigation, public transport directions and will cache data for offline use. And taking page from Apple’s book, Nokia spent an undisclosed sum to snap up California-based 3D mapping company Earthmine, with aim to use its technology to help index the world in 3D…

By the way, a post published on September 20 over at Nokia’s blog compared Nokia Maps to Google Maps and Apple’s in-house iOS 6 mapping service, unsurprisingly concluding that maps from Nokia were better.

Michael Halbherr, Nokia’s VP in charge of the new service, demoed at the unveiling how users can improve mapping data via a map creator tool, with updates going live in a matter of minutes or hours. And in regions like Myanmar where Nokia’s data is lacking, he said local communities have added over 7,000 kilometers of road data.

Nokia CEO Stephen Elop told reporters to location is now among Nokia’s five key biz segments, with the remaining four being smartphones, basic phones, patents and cellular infrastructure. Motivation for giving away Nokia’s secret sauce to rivals was the need for scale, the CEO said.

For the location platform to be at the highest quality, one needs scale, and you need as many different people contributing as possible. Of course, Nokia will build apps, some of them unique to Lumia devices, that gain a competitive advantage for Nokia.

As for three-dimensional street-level augmented reality experience, Elop would only say the company will release more information in due time. The Berkeley, California-headquartered Earthmine and its reality capture and processing technologies will become integral parts of Here’s 3D map making capabilities, a media release has it.

It’s worth pointing out that Nokia Maps have had 3D maps for years, courtesy of C3 Technology, a mapping startup Apple later acquired as a basis for the FlyOver 3D feature in iOS 6 Maps. However, 3D Nokia Maps worked only in web browsers on computers and required a special plug-in. 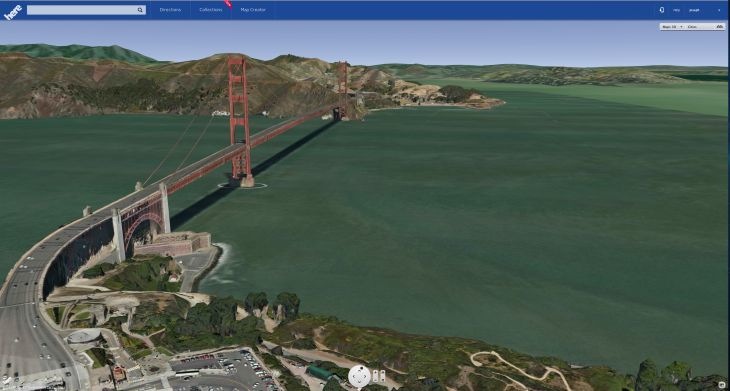 As for Nokia’s LiveSight augmented reality tech, it’s become an integral part of the Here service as well.

LiveSight provides the most precise and intuitive augmented reality experience and uses a phone’s camera viewfinder to make discovering the world as easy as lifting up a phone.

You’ve already seen LiveSight at work in City Lens, a feature Nokia exclusively developed  for the new Lumias. As such, other phones won’t be able to provide City Lens functionality, the company underscored. 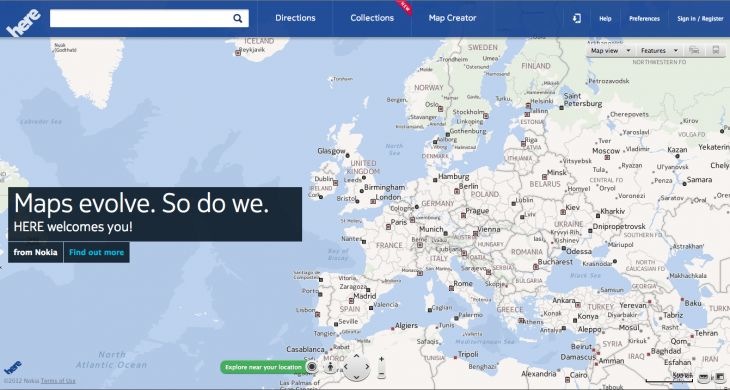 Nokia says that Here is about more than searching for addresses or getting from A to B.

It’s about living, breathing places, full of stories and memories and possibilities. With Here, you’ll unlock your world and live adventure every day.

Cutting to the chase, Nokia appears to be pulling out all the stops with Here: the service is cloud-based and built using standard HTML5 web technologies so it’s compatible with any mobile or desktop device or operating system that has a web browser capable of rendering HTML5 web content.

These, of course, includes Apple’s Safari and Google’s Chrome.

Smart move from Nokia #here is a true horizontal platform with no compromise: Android, iOS and html5

As for Apple, Nokia is planning a native Here iOS app, with Halbherr hoping the iPhone maker will approve it “in the next couple of weeks”.

Ina Fried of AllThingsD thinks that Here app “will have voice guided walking, but not driving directions”.

Nokia noted as much, writing in a media release that it’s launching a maps application for iOS under the Here brand.

Based on HTML5, it will include offline capabilities, voice-guided walk navigation, and public transport directions. The application is scheduled to be available for free download from Apple’s App Store in the coming weeks.

The ball is now in Apple’s court.

Something tells me that Cupertino will approve this one easily, just to drive people away from Google Maps. Apple pulled a similar maneuver by settling with HTC on patents, basically giving the ailing handset maker a ten-year license to use pinch zoom, rubber-band scrolling and other iPhone features it successfully asserted against more formidable enemies like Samsung.

As the saying goes: the enemy of my enemy is my friend.

As for Nokia Here, I’m eager to learn your opinion on today’s announcements so join us in comments.