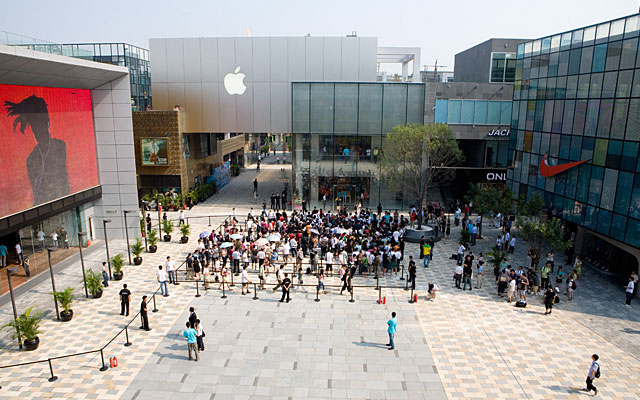 Apple’s retail web page was updated last week with an announcement of Beijing’s third Apple Store, scheduled for grand opening this coming Saturday, October 20. Apple already operates Sanlitun and Xidan Joy City retail outlets in the Beijing region so the upcoming store poses a welcome addition as the company preps to launch the iPhone 5 in China and looks to expand its retail operation in the 1.33 billion people market…

The new store will be located near Tiananman square, on Wangfujing Street, a major destination for locals and tourists with over 200 shops.

ifoAppleStore, a web site dedicated to tracking Apple’s retail expansion around the world, has more info:

Local sources say a street-level store will appear along Wangfujing Street, a mile-long, pedestrian-only collection of over 200 shops that include Chinese and international brands.

The street’s retail history dates back to 1200, and it is now a major destination for locals and tourists. The existing Xidan Joy City Apple store is about a mile west of Tianman Square, while the Wangfujing location will be east of the square.

Apple last month opened a second retail store in Hong Kong, one of the two special administrative regions of the People’s Republic of China. The company is also thought to be building an enormous super data center in Hong Kong.

China is the fastest-growing iOS and Android market. Unfortunately, the iPhone maker has too few stores in the country, helping smartphone rivals gain share.

This, coupled with the arrival of sophisticated and inexpensive mobile devices by Chinese companies, puts Apple under pressure to double down on its retail efforts in China.

Unlike the iPhone, the iPad remains the top tablet in China.

Also, consider this: population of China is a whopping 1.33 billion people and yet Apple only has five stores there, or approximately one store per 216 million customers.

Pictured above: the Sanlitun store.