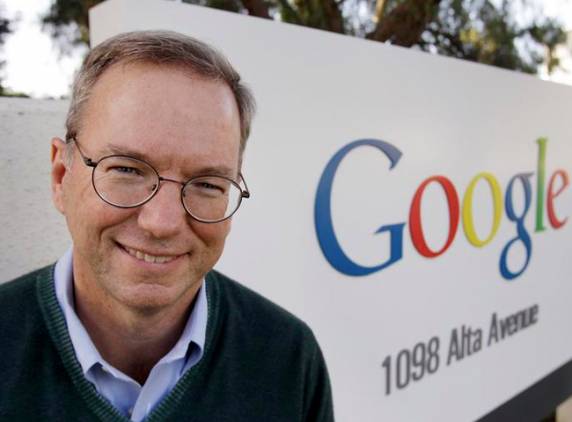 Google chairman Eric Schmidt sat down with The Wall Street Journal tech columnists Walt Mossberg and Kara Swisher last night to talk Maps, Apple and Android. “Apple should have kept our maps”, he remarked. “Apple decided a long time ago to do their own maps”, he revealed, suggesting Google very well knew way in advance that the iPhone maker would nuke Google Maps from orbit on iOS devices.

He also talks about the epic iOS versus Android fight and comments what it would take to persuade him to become an Apple CEO. A couple more highlights and a nice video right after the break…

And during an interview at the 92nd Street Y in New York last night, he also sarcastically remarked that “Apple’s done very well using our maps”.

Just to refresh your memory, Apple insiders told Bloomberg that Steve Jobs initiated the mapping project and put mobile software chief Forstall in charge. This contradicts another article from The New York Times, which quotes former Apple engineers who claim that Maps was an afterthought when Apple was designing the original iPhone.

Shortly following the iPhone’s introduction in 2007, Apple realized people use Maps a lot on their device, which caused friction between Apple and Google as the former was nervous about the latter collecting the iPhone users’ geographical location and other data each time they used the stock iOS Maps app that used to relied on a Google Maps backend.

Schmidt added fuel to fire by telling Mossberg that “[now they’ve] discovered that maps are really hard”. What he seems to be forgetting is that Apple Maps just launched with turn-by-turn navigation, spoken directions and 3D view, all of which were missing from the initial Google Maps release seven years ago.

It could be argued Apple shouldn’t have launched Maps until it was fully ready for prime time (Tim Cook said as much in his apology), though any fair comparison between the two products would have to wait at least a few years, when Apple works out all the kinks, smooths out the rough edges and improve upon reliability and accuracy of third-party data sets.

Here’s an interesting exchange between Schmidt and Swisher/Mossberg:

Swisher: What argument could you make to Apple to keep your maps?

Mossberg: Are you going to make your own iOS map?

Schmidt: Don’t want to pre-announce products, but if we made one, they would have to approve it. … They haven’t approved all of our apps in the past. (Schmidt allows that the two companies are always in communication.)

We know Google’s been working on an iOS maps app since the public announcement of Apple Maps in June. It’s apparently awaiting approval and Schmidt previously warned that the ball is now in Apple’s court.

Google was reportedly shocked as its contract with Apple to keep the maps app on the iPhone “had more time remaining”, but I’d bet my shirt they knew about Apple’s decision way in advance.

You can watch Schmidt’s talk in a video I’ve included below (fast-forward to mark 17:30 for Maps remarks).

Google’s chairman also disses Microsoft, calling them a “well-run company”, which however has yet to bring “state-of-the-art products” to market.

Schmidt also said he’d love to be the CEO of Apple, if presented with such an opportunity, because the iPhone maker “has the most cash”. Doesn’t sound like the answer Apple’s HR department would deem satisfactory.

Maybe Schmidt should see this recruiting video to realize life at Apple is all work, long hours and $1 annual CEO salary.

As for Android, Schmidt says the battle between Apple and Google for smartphone supremacy is “the defining fight in the industry today”, explaining there is a “huge race specifically between Apple and the Android platform for additional features”.

The Android-Apple platform fight is the defining contest. Here’s why: Apple has thousands of developers building for it. Google’s platform, Android, is even larger.

He’s right about the numbers playing into Google’s favor.

But this game is not about the numbers, it’s about the ecosystems, the fact Schmidt is perfectly aware of.

It ain’t about the iPad versus Nexus 7 versus Kindle Fire.

Otherwise, Wall Street would be quite impressed by Android’s huge unit numbers and bored with Apple’s “disappointing” iPhone sales.

Let’s not also forget that Schmidt sat on Apple’s board when Apple was developing the iPhone (and Google was also toying with the Android project).

Schmidt steals whatever he can from Apple while sitting on the company’s board and then slithers away like a slug.

No wonder many people buy Steve Jobs’s argument that Android is a stolen product that lifted the look and feel and features from Apple as soon as the company unveiled the handset.

Are those douchebag comments or perfectly valid remarks on Schmidt’s part?