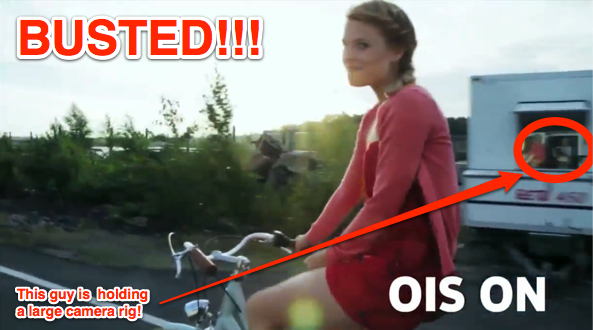 Nokia has always been the smartphone imaging king so no wonder the ailing cell phone giant emphasized advanced camera capabilities as the headline feature of its new flagship Lumia 920 smartphone, launched earlier today.

PureView technology debuted last year on Nokia’s Symbian-driven PureView 808 handset. It’s based on a pixel oversampling technique which reduces an image taken at full resolution into a lower resolution variant in order to enable lossless zoom and improve light sensitivity and crispness.

Though the new Lumia 920 only has a 8,x-megapixel sensor versus a whopping 41-megapixel on the PureView 808, it still takes in five times more light than other camera phones and taps image signal processor for some cool image stabilization technology (the iPhone 4S also does that).

Unfortunately, Nokia has gone too far in promoting PureView’s ability to stabilize shaky video, as proven by its latest commercial…

Before you jump straight down to comments, let me just point out that Apple is no stranger to misleading, deceptive and even false advertising.

With that off my chest, T.C. Sottek of The Verge made a nice discovery in the Nokia ad:

There’s a curious reflection in the window of the trailer in the background. It’s not a young man riding his bicycle alongside the cheerful model, but instead a big white van with a lighting rig and a cameraman standing in the doorway — with what appears to be a large camera rig.

Whatever he’s holding, we can reasonably agree it’s not a Lumia 920.

Here’s the original commercial, as seen on Nokia’s YouTube channel.

Here, this video should help.

Maybe the author is wrong and the reflection we’re seeing is just an artifact, but my two cents say Nokia’s advertising agency did a poor job cleaning up the problematic frames.

Nokia acknowledged as much, issuing a statement admitting that the PureView ad is misleading:

We spoke with a Nokia spokesman who agrees that the video is misleading and stresses that it was “never the company’s intention to deceive anyone.”

Nokia only wanted to demonstrate the benefits optical image stabilization. Nokia is now looking into updating the original video with a footnote so that it’s clear that the images are simulated.

Just to be clear here, footage from that ad was not shot with a Lumia 920.

The original Nokia Conversations blog post that announced the video has been updated with the following text: “the OIS video, above, was not shot using the Lumia 920.”

It’s also been updated with the following:

Note: The Lumia 920 pictures in this post were taken using prototype hardware and software, and then reduced dramatically in size.

Despite the obvious public relations slip-up here, it is still plausible that PureView’s image stabilization works as advertised.

Obviously, the thing to learn here is that nothing escapes the watchful eyes of the Interweb – not even a single frame.

Amazon is also expected to launch a bunch of new tablets tomorrow, among them an iPad contender.

Talk about a fall re-boot.

Didn’t anyone tell these companies their announcements will be washed away by the iPhone 5 tsunami next week?

Speaking of which, kudos to HTC for cleverly scheduling their presser until after the iPhone 5 thing next Wednesday.

So, the (likely) faked PureView ad.