Apple just issued invites for its long-anticipated media event related to the next iPhone and scheduled to take place on next Wednesday, September 12, at the Yerba Buena Center for the Arts at 10:00 am.

As has increasingly been the case, the confirmation comes via The Loop’s Jim Dalrymple whose strong track record of accurate Apple reporting has made him an unofficial mouthpiece for the company…

John Paczkowski of AllThingsD, a Wall Street Journal-operated blog, has confirmed the information as well.

The next iPhone arrives at a time when jumbo-sized Android devices continue to gobble up market share everywhere, brutally killing all competition and slowing down Apple’s growth.

Also important, an analyst estimated today that the iPhone 4S is no longer America’s best-selling handset as the Galaxy S III has beaten Apple’s device in August across three major U.S. carriers (except for AT&T), which is a first for Apple since the original iPhone hit the market five years ago. 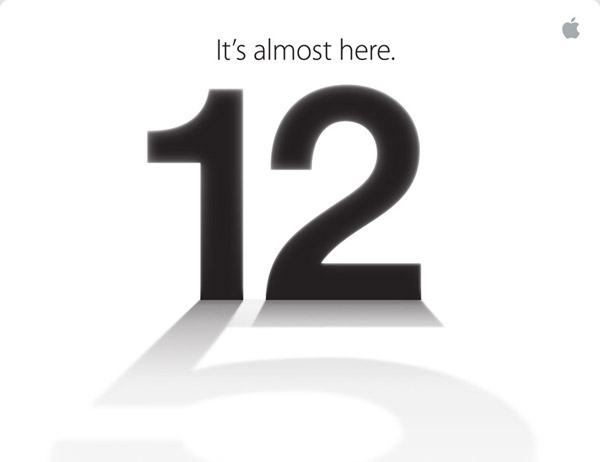 This has got to be the most minimalistic invite graphics by Apple I have ever seen.

The “It’s almost here” tagline reminds me of this iPhone 3GS commercial that opens with the “It’s finally here, the first phone to beat the iPhone” line.

I’m stretching it, yeah – but I needed a good excuse to run that commercial here.

For what it’s worth, I think it has got to be the best iPhone commercial so far.

Can you decipher any hint from the above image, apart from the oh-so-obvious shadow cast by the big “12” and looking like a “5”?

Interestingly, a lot of folks used to point out in comments that Apple will never call this the iPhone 5 because it’s a sixth-generation iPhone.

It’s also worth stressing that this is looking to be an iPhone-exclusive presser. Of course, we’ve heard before that a rumored smaller and inexpensive iPad will be launched at a separate media event in October.

As for the shadow of the invite showing a “5”, I’m inclined to believe Apple will call it the iPhone 5 after all, much to the surprise of many.

According to iDB’s non-scientific poll, nearly four out of each ten respondents voted for the iPhone 5 name and the same percentage of people think Apple will drop the numerical suffix and call the device the new iPhone, akin to the third-generation iPad.

So, what’s your read of Apple’s invite?