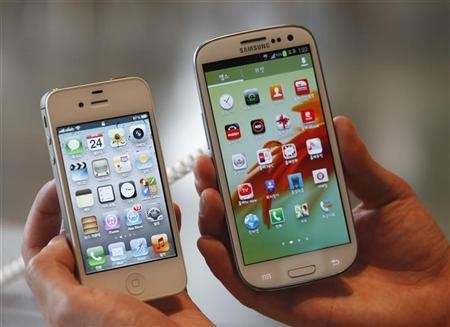 Citing “channel checks”, one analyst estimated that Samsung’s three-month-old Galaxy S III smartphone has manage to outsell Apple’s iPhone 4S in the United States during the month of August. Take it with a grain of salt as Apple doesn’t break down iPhone numbers by model and Samsung stopped reporting phone and tablet sales for competitive reasons a year ago.

If true, this isn’t terribly surprising given that the iPhone 4S is now almost a year old and especially knowing folks have been withholding their purchases in anticipation of the next iPhone…

This would also mark the first time since the iPhone 4S’s October 2011 debut that it wasn’t the best-selling handset in the United States.

Jay Yarow, writing for BusinessInsider, relays a note Canaccord Genuity analyst Michael Walkley sent to clients this morning, opining that “if Samsung is beating Apple in October, then Apple has a big problem on its hands”.

According to the note, the Galaxy S III was the best-selling device at Verizon, Sprint and T-Mobile USA, whereas the iPhone 4S remained the top seller at AT&T.

As for the analyst, he wrote:

We believe this is the first month since the iPhone 4S launched in October 2011 that it was not the top selling smartphone in the U.S. market.

However, our checks indicated strong consumer interest and likely demand for the iPhone 5, and we believe Apple will return to strong number one smartphone share in the U.S. post the iPhone 5 launch.

Here’s a handy month-over-month comparison of the top selling handsets in the United States over the past four months. 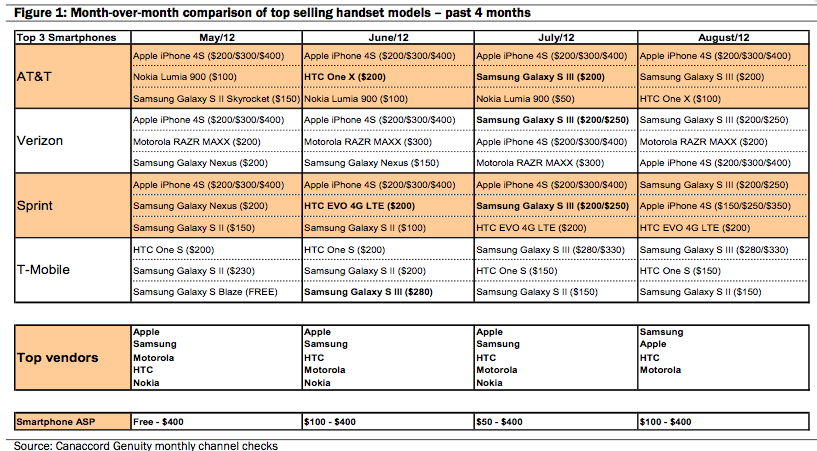 Note that at Verizon, the iPhone 4S slipped to the third place, behind #2 Motorola Razr Max. this jives well with a June finding by Fortune which first reported that Motorola’s device passed the iPhone to become Verizon’s best-selling handset.

Of course, T-Mobile doesn’t carry the iPhone yet (and is advising its retail army to sell against the iPhone). At Sprint, the iPhone 4S ranked second, according to the analyst’s channel checks.

The numbers corroborate a similar claim by market research firm Kantar Worldpanel ComTech, the WPP-owned market analysts, which noted that market share is following smartphones with screens in the neighborhood of four inches and up.

Specifically, nearly one-third of all devicessold in the last three months had a screen size of over 4.5 inches, per Kantar. Our own non-scientific poll showed one third of respondents voting that a four-inch display should be the new gold standard for iPhones.

The next iPhone, of course, is expected to have a four inch display incorporating in-cell display technology that produces better colors and allows for thinner designs. The display is said to be taller and only marginally wider to allow for easy one-hand navigation with one’s thumb, as seen in the below mockup. 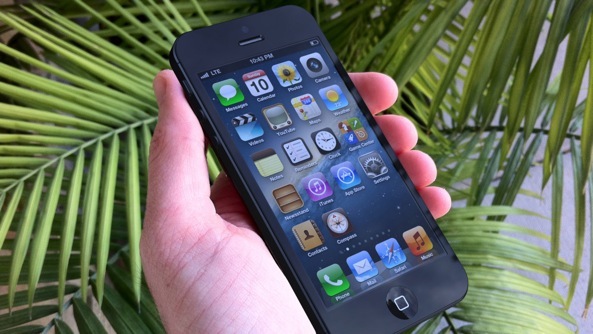 Though the iPhone is no longer the king in the States, with just eight days until next Wednesday’s iPhone 5 unveiling (and September 21 availability) Samsung’s presumed lead should is expected to be short-lived.

Resident Apple analyst Gene Munster with Piper Jaffray deemed the next iPhone’s launch “the mother of all upgrades” and other analysts expects Apple’s iPhone sales to rebound due to pent up demand, hardware changes like a bigger screen and sheer publicity surrounding every iPhone launch.

Has the iPhone’s reign come to an end or will the iPhone 5 turn the table on the smartphone market, all over again?