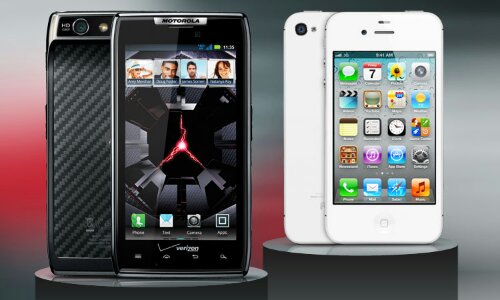 Since the iPhone launched on Verizon’s network last year, the handset has been the carrier’s most popular smartphone. Most quarters it’s even sold better than all Android devices combined.

But it looks like things are starting to shift at Big Red, as a new report suggests that the iPhone is no longer the wireless provider’s bestselling device. What is? Motorola’s Droid RAZR MAXX…

The news come from a research note by Anil Doradia, of William Blair. The analyst says that according to his “channel checks” from the April-May-June quarter, the iPhone has dropped from Verizon’s bestselling smartphone spot for the first time in 16 months.

“Doradia attributes the iPhone’s fall from grace less to the usual slowdown in advance of a new model than to Verizon’s agressive marketing of competing 4G devices, particularly Motorola’s Droid RAZR MAXX, which the carrier is selling for $299 with a 2-year contract.”

You could argue that all iPhone sales dip a little bit when a refresh is on the horizon. But this particular study goes all the way back to May — just 6 months after the 4S debuted.

The truth is, it looks like Motorola has found a winning combination in the MAXX. It’s the one Android handset that has an LTE radio, and battery that can last all day. We’ve spoken with multiple local Verizon stores, and it’s “easily” their best-selling handset.

Of course, this is all likely to get shaken up once again over the next couple of months. Samsung is launching their popular Galaxy S III handset. And we all know the iPhone is due for a refresh in the fall.

One thing is for sure though, Apple better bring its A game with its next smartphone. The competition is really starting to heat up.