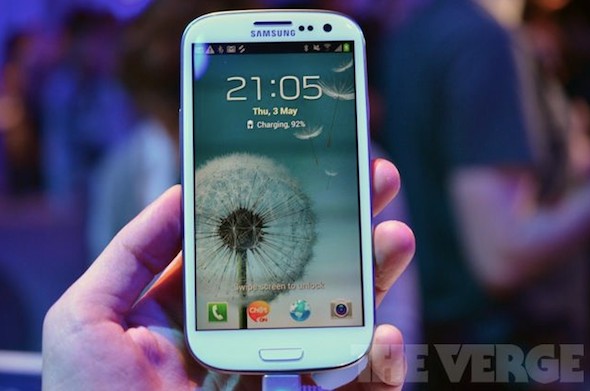 Even though iDB is primarily an iPhone-focused blog, we like to keep tabs on what the competition is up to. Earlier this week we told you about RIM’s all-new BlackBerry 10 platform, and today we’ve got some news regarding Samsung’s latest handset.

The Korean manufacturer unveiled the Galaxy S III earlier today at a media event in London. Packed with a 4.8-inch Super AMOLED display and a host of other high-end components, the device certainly looks impressive on paper. But is it?

That may depend on which version of the handset is available in your area. While the global variant of the Galaxy S III will be equipped with the new Exynos 4 Quad quad-core processor, regional models will likely include dual-core alternatives.

But Samsung didn’t just give its Galaxy S line a hardware makeover, it also added in a ton of new software features as well. Some of them are actually pretty impressive, like the new Pop up play feature, which essentially gives you on-device picture-in-picture.

Then there are some features that some might say aren’t so innovative, like the new Siri-like digital assistant “S Voice.” And the new AirPlay-like “AllShare.” Samsung even introduced Scan and Match, a new service that scans your music collection and automatically uploads it to the cloud. Interesting.

Initial impressions seem to depict the device as just an incremental update to the current Galaxy S II handset, but we won’t know how it performs in real life until it hits the market next month. One thing is for sure though, Samsung’s bound to sell a ton of them.

What do you think of the Galaxy S III?