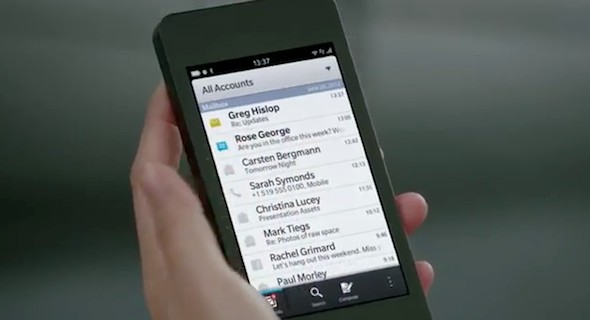 It’s pretty common knowledge that the smartphone space currently belongs to Android and iOS. The two platforms make up more than 70% of the market, which at one time belonged to the likes of Microsoft and RIM.

But neither company saw the iPhone coming, and both failed to respond quickly. Now they’re fighting for the crucial “third platform” spot. Microsoft with its Windows Phone OS, and RIM with its new BB10…

We’ve all seen Microsoft’s platform. While it struggles to gain any real traction with consumers, it continues to receive praise from critics. And there has certainly been a lot of talk about Nokia’s latest WP7 handsets.

Then there’s RIM’s BlackBerry 10. After nearly two years of talking up the operating system as its savior, RIM unveiled BB10 this morning to an auditorium full of developers at its BlackBerry World conference.

Surprisingly, the OS itself looks good. It certainly has potential. But you know what else had potential? Palm’s Web OS. Unfortunately, the consensus in the tech world seems to be that this is too little, too late.

As much as we want to believe this is a company reborn, RIM is still stuck in its old habits. From its business-oriented sales pitch — how are you going to win back consumer marketshare with SalesForce.com presentations — to its”alpha” handset it gave to developers that doesn’t make phone calls, RIM looked like its old self more than a few times today.

Of course, we’ll reserve our final judgement for when a BB10 device actually ships. But sadly, that won’t likely be for another 6 months. And from where we’re sitting, it looks like Windows Phone will snatch the crucial third spot long before that.