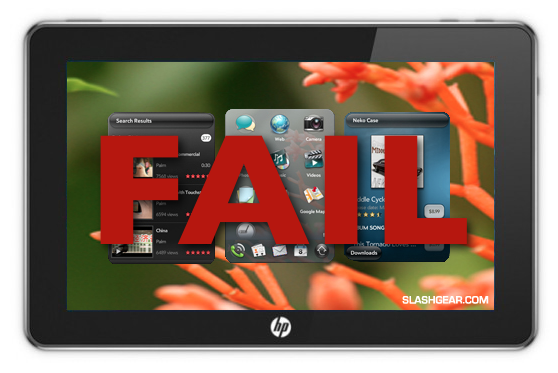 In what some would call a totally insane move, HP has announced that it will be discontinuing its line of webOS devices, most notably the newly-released TouchPad tablet. HP bought Palm and the webOS platform last year for $1.2 billion.

While this doesn’t immediately effect Apple, it is interesting that one more iPhone/iPad competitor has bit the dust. Who will be left standing this time next year?

What makes HP’s sudden discontinuation of webOS so unforeseen is that, up until July, HP seemed to have a very solid webOS strategy. AllThingsD reports that HP said that the company was committed to a broad lineup of webOS devices. The whole reason that HP bought Palm and webOS in the first place was because the company needed a viable platform to get into the consumer mobile market — iOS and Android was (and has been) eating everyone’s lunch.

“The combination of Palm’s trailblazing webOS and Hewlett-Packard’s strength as the leading provider of everything from PCs, laptops, and printers to home electronics and enterprise systems promises an amazing roadmap of new tools for your mobile and web-connected future.”

The “future” didn’t really pan out for HP apparently.

webOS has been in trouble for awhile, with a huge lack in third party developer activity, and little to no market adoption. Former Palm CEO Jon Rubinstein also left the project recently, and things have been going downhill fast since then.

When software is left unsupported, hardware tied to that software becomes obsolete. The TouchPad was out on the market for only 6 weeks, and hopefully HP will offer refunds to recent purchasers. As Gizmodo points out, there’s no reason for HP to leave webOS blood on the customer’s hands.

Also, for all five of you that bought a new webOS phone in the last several months, you should probably start considering the upcoming iPhone 5.