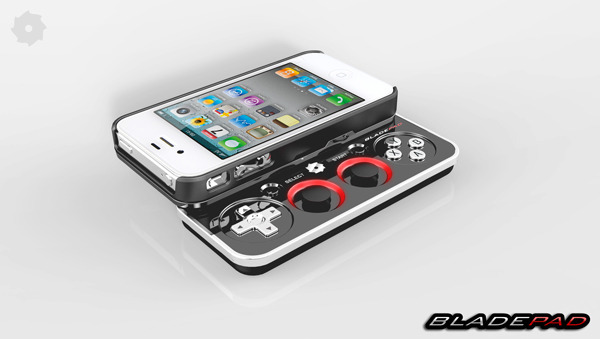 A few days ago we asked the question, “Should Apple build a game controller?” It was a pretty fair question, considering that the graphics in iOS titles are getting closer and closer to console-quality, but the gameplay isn’t.

We’ve seen several accessory-makers try to remedy this problem by building physical gamepads, but none of them have managed to gain consumer traction. The new Gamepad, however, is hoping to change that…

If you haven’t heard of the Bladepad, it’s a new iOS-compatible game controller that connects to your device via Bluetooth. It has two joysticks, a control pad, and four action buttons — very similar to most game controllers.

But Bladepad’s major selling point is that it’s extremely portable. It quickly attaches and reattaches to a special iPhone 4/4S case, so it’s available when you need it, and removable when you don’t. It’s also fairly thin for what it is.

Because the device uses Bluetooth 4.0, it doesn’t use much power. The Bladepad team estimates you’ll get  roughly 4 hours of continuous gameplay, which is decent compared to other handheld consoles. It uses a micro USB charger.

The big question is obviously developer support. The team says they are currently in talks with several major, and independent, game studios but cannot provide specifics. They do say, however, that we can “expect Bladepad to have the game support of a popular handheld console.” That’s good news, if they can follow through.

The Bladepad is currently just a Kickstarter project. The group behind it is trying to raise $55,000 by August 26th so they can begin mass producing these things. As of right now, they’re just under the $9000 mark.

If you’re interested, a pledge of $59 or more will score you your very own Bladepade. A deal, to be sure, as the accessory carries an MSRP of $99. There’s a few colors to choose from, and they hope to start shipping in December.

What do you think of the Bladepad? Does it have what it takes to go mainstream?