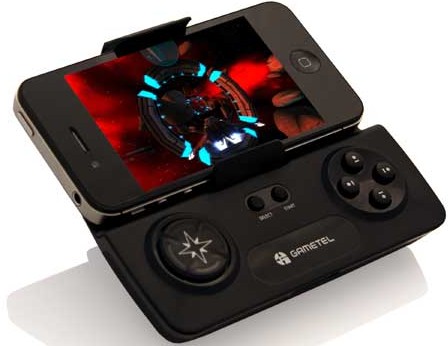 Considering how popular iOS has become as a mobile gaming platform, you would think that the market for iOS gaming accessories would be huge, but it’s really not. The iOS gaming peripheral space is actually quite small.

But it is slowly growing, thanks to notable accessories like the iCade, the iControlPad, and now the Gametel Gamepad. The once Android-only wireless controller is all set to make its iOS debut at the Consumer Electronics Show next week…

Fructel has just announced that its popular Android wireless game controller now supports iOS devices. The peripheral clamps on to your iPhone, iPad, or iPod touch, and connects wirelessly to the device using bluetooth.

The Gamepad is compatible with hundreds of arcade titles in the iCade suite, as well as other select iOS games. The controller sports the ever-familiar d-pad layout with four action buttons and two side triggers. And perhaps most interesting, the folks at Fructel are claiming that the accessory has a battery life in upwards of 9 hours. Wow.

Anyone interested in the Gametel Gamepad can visit its website for more information. It looks like the accessory is available in the UK for £49.99 (about $77.00) and other parts of Europe, but there isn’t any mention of US availability.

Wake us up when we can use this thing to play Grand Theft Auto III.

What do you think of the Gametel Gamepad? Interested?