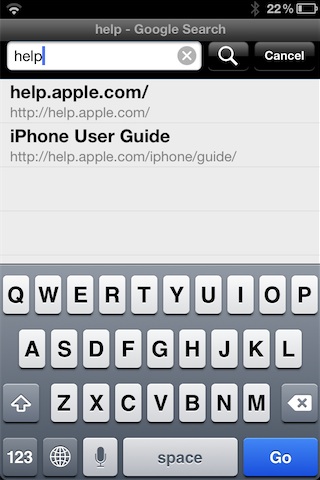 As you all have probably figured out by now, I’m a huge fan of Google Chrome. There are many reasons why I prefer Chrome over any other web browser, and one of the foremost reasons has to do with the Omnibox.

The Omnibox in Google chromes combines your normal address box with a search box for an all encompassing box that conveniently performs both functions. Other browsers have been slow about adopting this obvious improvement in navigation, but at least Apple is starting to show some signs that they plan on heading in that direction — Safari on OS X Mountain Lion features an Omnibox, after all.

When it comes to iOS, though, Safari is still lagging a bit behind. Even the iOS 6 beta version of Safari lacks this feature. That’s where this new jailbreak tweak plans to step up to the plate. Safari Omnibar is a recently released tweak that adds an Omnibox to Safari, whether Apple plans to do so or not.

While the attempt is noble on the part of the developer, Safari Omnibox still suffers from one major misstep. It forsakes the slash, period, and TLD shortcut buttons on the keyboard for a spacebar. Obviously the spacebar is needed to perform searches, but you lose the ability to use the aforementioned shortcuts in the process.

This is without a doubt one of the reasons why Apple has shied away from adopting an Omnibox in iOS. Google, on the other hand, was able to successfully implement an Omnibox in their recent release of Google Chrome, while still maintaining most of the shortcuts necessary for fast and efficient web browsing on a handheld device. True, they had to make some sacrifices in the visual design to do so, but I think most are okay with the compromise.

Safari Omnibox, like predecessor Safari UniBar, makes a valiant attempt, but still falls short due to this keyboard shortcut discrepancy. The developers should look at the way Google implemented such shortcuts with Chrome, and imitate it in some manner.

On a side note, the developer of Omnibar included a “find in page feature” in the release, but honestly, it would have been better if they would have just concentrated on the fundamentals.

Still, if you’re a Safari diehard, and have no plans on trying Chrome, then Safari Omnibar may be a tweak worth giving a try. It’s a free download on Cydia’s BigBoss repo for jailbroken iPhones. Be sure to share the experiences that you’ve had with the tweak in the comments below.